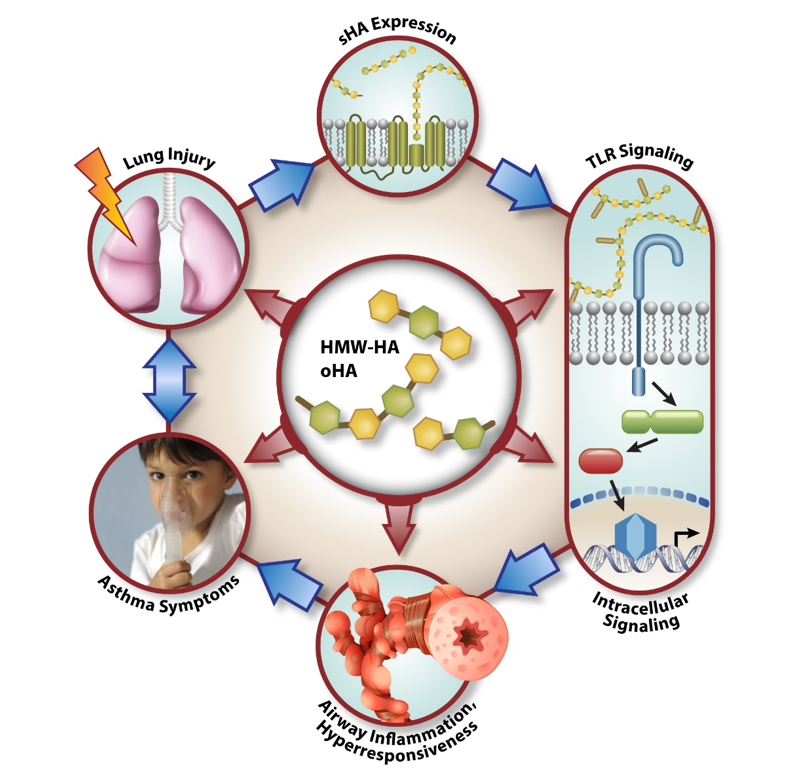 Figure 1. Hyaluronan is released during lung injury, and leads to inflammation and lung disease. Certain hyaluronan types can be used to break this vicious cycle and treat airway disease. 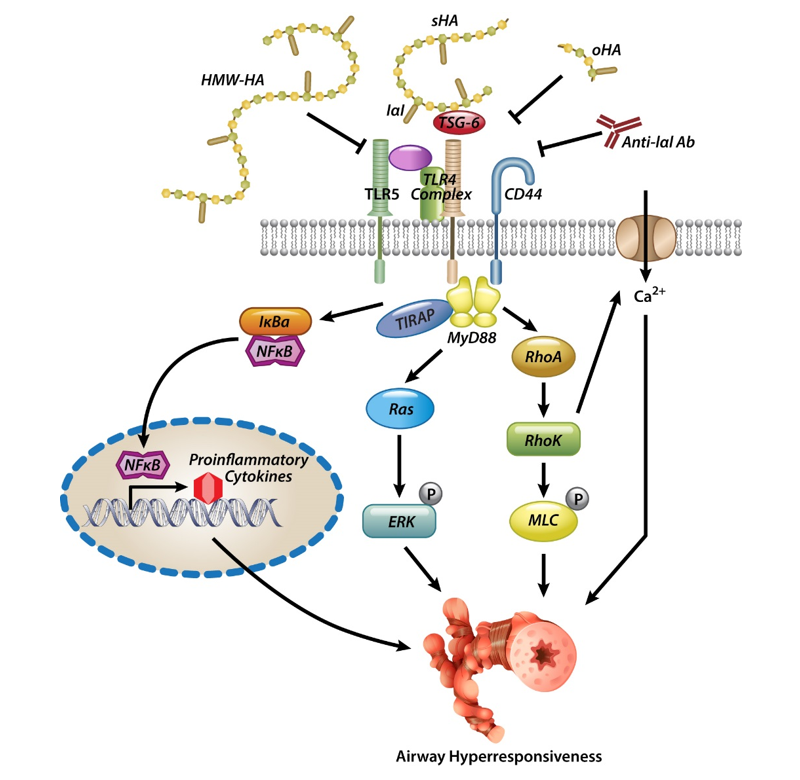 Stavros Garantziotis, M.D., is Medical Director of the NIEHS Clinical Research Unit (CRU), head of the Matrix Biology Group, and holds a secondary appointment in the Clinical Research Branch. The group studies cell-matrix interactions in the response to environmental lung injury.

Extracellular matrix (ECM) and cells are in a constant feedback relationship during development and in the tissue response to injury. Cells actively modify their ECM in the course of development, differentiation and inflammation. On the other hand, ECM can be directly altered through environmental stimuli, and the ECM milieu affects cell behavior, function and survival. Our group investigates this relationship—particularly the role of the ECM component hyaluronan—in relation to the lung response to environmental injury.

Hyaluronan is an abundant ECM component, and can affect cell development, scar formation, angiogenesis and inflammation. Hyaluronan is released during environmental lung injury and sets in motion signaling responses which lead to airway inflammation, hyperresponsiveness, scarring and ultimately clinical symptoms like wheezing, cough and shortness of breath (Figure 1). The Matrix Biology Group has studies and identified signaling pathways of hyaluronan after injury (Figure 2). The group utilizes mouse models of disease, and clinical research in a “bench-to bedside-to bench” approach for high impact results. Importantly, we have identified agents that can modify hyaluronan signaling and have potential as treatment for airway disease and testing their efficacy in clinical studies.

More recently, we discovered a role in environmental lung injury for certain cell surface receptors which recognize not only hyaluronan but also bacterial wall proteins. Through this insight we were able to uncover an important role for the microbiome in lung injury. Our research suggests that a healthy microbiome promotes lung health as well and protects against the development of diseases such as emphysema and idiopathic pulmonary fibrosis. Excitingly, we may be able to distill the microbiome effect down to single proteins, that can be then given to patients as treatment. We have partnered with a company to pursue this goal and are looking forward to translating our basic insights into the clinic.

Garantziotis obtained his medical degree at the Albert-Ludwigs-University in Freiburg, Germany. After an internship in Internal Medicine at the University Hospital in Munich, Germany, he completed his residency in Internal Medicine at the Albert Einstein College of Medicine of Yeshiva University in New York, New York, and received his Board Certification in Internal Medicine. He then completed a fellowship in the Division of Pulmonary, Allergy and Critical Care Medicine at Duke University Medical Center, and received Board Certification in Pulmonary Medicine and Critical Care Medicine. Garantziotis remained a faculty member in the Division until he joined the NIEHS to set up and supervise the new CRU. In addition to his role as Principal Investigator and Medical Director of the CRU, he was Acting Clinical Director from 2013-2015.

The research of our group is at the core of the NIEHS mission – we are investigating host factors which affect the response to environmental lung injury. For example, we have identified intrinsic mediators of airway hyperresponsiveness in environmental lung injury (ozone exposure) and in asthma (a common public health problem with known environmental triggers). These findings increase our understanding of human environmental disease pathogenesis and open the possibility for potential treatment options.