Women's Health and the Environment 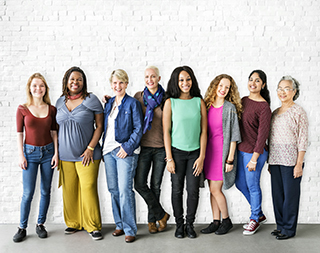 Health is influenced throughout the lifespan by many factors, including sex, gender, racial ethnicity, culture, socioeconomic status, and the environment. Women's health is an essential part of the NIEHS research agenda. Researchers investigate environmental, lifestyle, and behavioral factors to prevent or reduce the chance of women developing health problems.

Certain health conditions and diseases are specific to women, two of which are endometriosis and uterine fibroids.

Endometriosis – This common gynecological disease affects about 5.5 million women in the U.S. It occurs when the lining of the uterus grows on the surface of organs in the pelvic and abdominal areas. Endometriosis can cause great pain and menstrual complications, and it is a leading cause of infertility. There are treatment options for the condition.

Uterine fibroids – Also known as leiomyomas, these non-cancerous tumors are made of smooth muscle cells and fibrous connective tissue, and they can range from microscopic to several inches in size. Fibroids usually are not a critical problem but may cause physical pain and may affect emotional health. They can appear with endometriosis. Fibroids are a leading cause of hysterectomies in the United States.

Many women (70% or more) have fibroids by age 50, although they may not be aware of them. Up to half of these women have symptoms that can include:

NIEHS-supported research seeks to understand the how endometriosis and uterine fibroids develop and how the conditions may be affected by the environment.

Endometriosis research efforts include the following:

Study of Environment, Lifestyle & Fibroids (SELF) – More than 80% of African American women are likely to develop fibroids. Of these women, as a result, 1 in 5 will have a hysterectomy, as compared to 1 in 15 white women. To learn why there is a difference, SELF enrolled more than 1,600 African American women, ages 23 to 34, without a prior clinical diagnosis of fibroids. SELF uses ultrasound screening to detect new fibroids and follow fibroid growth over a five-year period. Researchers are looking at vitamin D deficiency, reproductive tract infections, ancestry, and other possible risk factors for fibroid development.

In one project, the SELF study found that fibroid growth varied by initial size. Small fibroids, less than 2 centimeters in diameter, can have rapid growth but also a high chance of shrinking or disappearing. Larger fibroids grow more slowly. For example, a 2-centimeter fibroid is likely to take 4-5 years to double in diameter. SELF is the first study to measure fibroid growth in a large, high-risk group of African American women, 23-35 years old. This fibroid-growth information may be useful for developing treatment strategies.

Fibroid Growth Study – Understanding how fibroids grow is important because large fibroids are more likely to cause health problems than smaller ones. NIEHS researchers examined differences between fibroids that are likely to grow versus those that do not. They studied 116 women for up to one year, some of whom underwent myomectomies (fibroid-removal surgery). They found:

Postpartum Uterine Regression Study – To investigate pregnancy-related changes in fibroids, NIEHS Women’s Health Group researchers collaborated with a University of North Carolina at Chapel Hill study using ultrasound examinations. Women whose ultrasounds showed they had fibroids in early pregnancy had another ultrasound a few months after the end of their pregnancy. Among 171 women with one initial fibroid, 36% had no identifiable fibroid in the follow-up ultrasound; fibroids that did not disappear tended to decrease in size. 11 Understanding the reasons behind these changes may lead to new research or strategies for non-surgical fibroid treatment.

Role of Growth Factors in Uterine Leiomyoma Growth – A growth factor is a substance, such as a protein, that may stimulate development of tissue. The Molecular Pathogenesis Group within the National Toxicology Program’s laboratory is looking at growth factors in uterine fibroid development. Growth factors are made by our bodies, but environmental chemicals, such as cadmium, may affect production. This research approach is a new way to determine how fibroids develop and how they may be treated.

The NIEHS Sister Study examines environmental and familial factors that may affect breast cancer and other diseases. More than 50,000 women across the U.S. and Puerto Rico, between ages 35–74 whose sister had breast cancer, joined this landmark research effort. Because of their shared environment, genes, and experiences, studying sisters provides a greater chance of identifying risk factors and ways to prevent breast cancer. Many research articles from this ongoing study are published.

Other Research and Initiatives

Apple Women's Health Study - NIEHS teamed with the Harvard T.H. Chan School of Public Health and Apple to gain a deeper understanding of how certain demographic and lifestyle factors could have an impact on menstrual cycles and gynecologic conditions including infertility, menopause, and polycystic ovary syndrome (PCOS). This first-of-its-kind study has a cohort of more than 100,000 participants across the U.S. The study design embeds privacy while making it accessible to all women, regardless of socioeconomic status, race, geographical location, or other factors.

Reproductive System Disorders research concerns how exposure to environmental pollutants can lead to diseases, disorders, and conditions that affect functioning in female and male reproductive systems.

Women’s Health Awareness is an initiative within the NIEHS Clinical Research Branch, Office of Human Research and Community Engagement, that:

This multidisciplinary program is designed to enhance research for understudied, underrepresented, and underreported (U3) populations of women. It brings education, environmental health literacy, and public health to women of the North Carolina Triangle region and beyond for promoting healthier lives and environmentally safer communities.