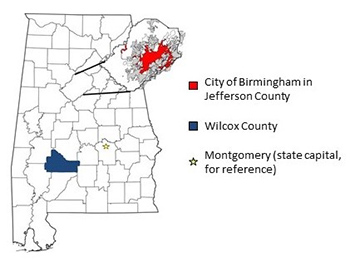 Researchers and community partners who are part of the Environmental Health for Alabama Communities (ENACT) team are working together to understand how extreme heat events affect urban Birmingham and rural west central Alabama. Using a community-engaged approach, the partners are measuring individual and community-level heat and air exposure to identify risk factors for heat-related morbidity and mortality. This information can be used to lower the risk of heat-related health problems by developing educational tools and interventions that are tailored to urban and rural settings. 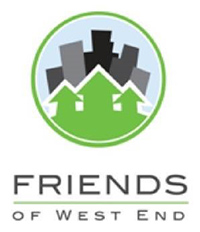 Extreme heat is commonly encountered in both Birmingham and west central Alabama, where normal summertime highs are around 90 degrees. Studies have linked extreme heat events with increased morbidity and mortality, but it is not known whether the risk from these events differs between rural and urban communities.

Using personal- and community-level measurements of pollution and heat exposures, the ENACT team is examining how those exposures differ between communities. They also want to find out whether data from weather stations or remote sensing instruments can predict individual-level heat exposure. Another goal of the study is to identify unique behavioral, physiological, or physical environmental risk factors for heat exposure in the urban and rural communities.

The project includes researchers from Virginia Polytechnic Institute and State University, the University of Alabama at Birmingham (UAB) Center for the Study of Community Health, and Johns Hopkins University. They are working with Birmingham’s Friends of West End, which educates, engages, and advocates for the city’s poorest and most medically underserved neighborhoods, and West Central Alabama Community Health Improvement League (WCACHIL), which employs community health advisors to educate and bring community members together on specific public health topics. WCACHIL has worked with UAB researchers on many projects through the Center for the Study of Community Health, which is funded by the Centers for Disease Control and Prevention. 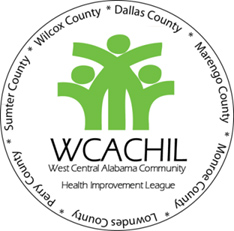 Community advisory boards (CABs) and community-wide workshops are helping to strengthen the problem-solving capacities of both researchers and community members. CAB meetings and community workshops also help provide the social context for developing an accurate picture of exposure and behaviors, physical environments, and physiological parameters associated with exposures. 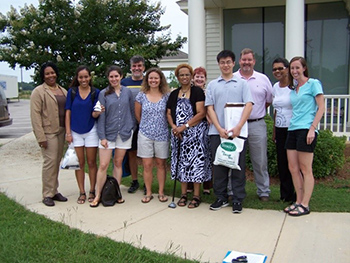 The community workshops have been used in conjunction with satellite-derived maps to identify where to place a network of temperature monitors and passive volatile organic compound (VOC) samplers by examining where community members frequently spend time outdoors. In addition, volunteers from representative residential neighborhoods were recruited by community members to wear personal monitors.

A community-engaged approach was particularly important for this study because of the area’s history. Although the Tuskegee Syphilis Study eventually led to modern bioethics and the protection of human subjects, mistrust of the primarily white medical profession is still prevalent. In addition, the violence experienced during the Civil Rights Movement likely plays a role in the racial division seen today. 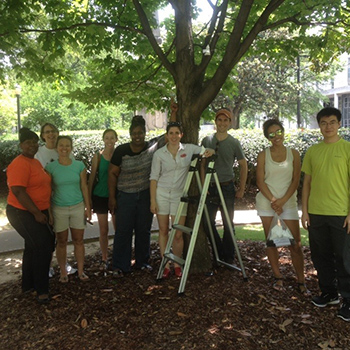 Emphasizing communication. The CABs identified several priorities, including communication and dissemination of project progress, as well as gathering feedback from the wider community. Annual workshops provide communication between residents and community/academic partners. Examples of these workshops include a panel for a breakout session, “The Rules of Engagement: Fully Involving Communities in Collaborative Research,” at the UAB Community Engagement Institute, as well as focus groups and presentations at the Black Belt Institute. 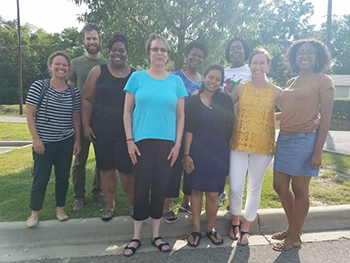 Monitoring exposure. Community workshops, discussions, and planning with community partners identified representative rural and urban neighborhoods for placement of stationary temperature and VOC monitors. Community partners identified specific locations for monitor placement and collaborated with the project team on checking and collecting the monitors at the end of the measurement period.

For personal exposure monitoring, community and academic partners worked together to plan and design the study. During the summer of 2017, the partners recruited, consented, trained, and followed up with 180 study participants from whom personal temperature and pedometer measurements were collected. Researchers will compare personal exposure measures to stationary monitors and data from remote sensors to find out how well each method can measure or predict individual-level heat exposure. 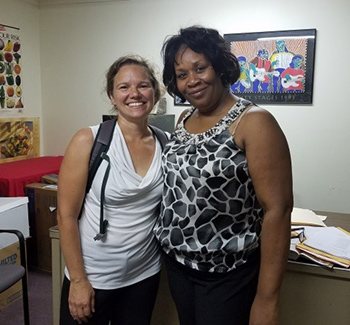 The study partners encountered challenges that are common to community-engaged research. For example, it took time for the academic researchers and community partners to develop relationships and trust. It was also important to understand and negotiate the differing priorities and timelines of the community partners and academic researchers. In addition, communicating effectively required balancing everyone’s preferences for, and the feasibility of, various communication methods, such as in-person meetings, phone calls, emails, or a shared webpage.