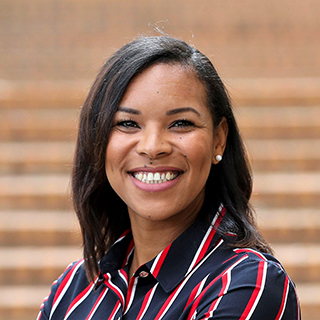 Nicole R. Sparks, Ph.D., has big news: She just accepted a faculty position as an assistant professor in the Department of Environmental and Occupational Health at the University of California (UC), Irvine. In summer 2022, she will start her own lab researching how embryonic chemical exposures disrupt bone development. Funding from NIEHS, through the NIH program Maximizing Opportunities for Scientific and Academic Independent Careers (MOSAIC), will help Sparks forge her research career.

Sparks’ interest in toxicology took root during a developmental biology course in college. A medical degree had been her goal, but that class changed her trajectory.

“I was a new mother at the time, and my son suffered from a lot of respiratory problems,” Sparks said. “I grew up among people who smoked, so those lectures piqued my curiosity in how environmental chemicals affect fetal health. I decided that instead of pursuing medicine, I would become a research scientist.”

“This was the first time I heard anyone talk about how chemicals in the environment could harm bone development,” Sparks said. “The presentation made an impression on me, and I began envisioning myself in the niche field of developmental toxicology.”

Earning a Bridges to Stem Cell Research Award from the California Institute for Regenerative Medicine gave Sparks an opportunity to finish her master’s degree, and later her doctorate, at a research-intensive lab. She jumped at the chance to join zur Nieden’s lab, where she studied how tobacco products affect bone development.

Sparks found that a popular brand of tobacco products had a toxic effect on bone development by interfering with gene expression during the formation of specialized bone cells, called osteoblasts, that had derived from human embryonic stem cells. 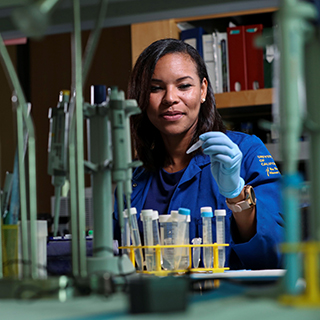 In 2021, Sparks was among the inaugural recipients of an award from the new NIH MOSAIC program. The program supports scientists from underrepresented groups as they transition from postdoctoral research to independent research careers. Sparks is the first MOSIAC awardee to receive funding from NIEHS.

“I knew I wanted to become a tenure-track professor and run my own lab,” Sparks said. “I was in disbelief when I learned that I had received the MOSAIC award. I actually think I cried.”

The grant also funds Sparks’ current research, which examines how chemical exposures affect microRNA expression associated with bone development. MicroRNAs are small RNAs that play a vital role in gene expression, controlling which proteins get made and when.

“The MOSAIC award has helped me set up an amazing mentoring team to bounce off questions about my research and starting a lab,” Sparks said. “With this funding, I will hopefully gather enough evidence to describe exactly how environmental chemicals affect bone development through microRNA regulation.”

From Cell Culture to Mice

She found that all chemicals altered levels of several microRNAs, indicating that they might play an important role in forming bone.

Next Sparks explored which aspect of bone development those microRNAs were involved in. While she expected them to be associated with a type of “master switch” responsible for turning key genes on or off, instead the microRNAs were primarily involved in controlling early developmental genes and bone metabolism, the buildup and breakdown of bone.

Going forward, Sparks will narrow down the microRNAs of interest to a couple key candidates, which she will examine in studies using mice.

“Once we move to animal models, as opposed to cell culture alone, we can determine if the candidate microRNAs are key players in bone development within a complex system,” Sparks said. “Hopefully these mice studies will reveal if changes in candidate microRNA expression due to environmental chemical exposure can truly lead to a birth defect in bone,” she explained.

By tailoring innovative methods used in neurodevelopment research to her own project, Sparks will attempt to turn off microRNA expression in utero that otherwise could lead to a bone birth defect.

“One of the main goals is being able to find microRNAs that could be a biomarker of bone developmental toxicity,” Sparks said. “For example, maternal plasma or fluids obtained during amniocentesis — a test for fetal developmental abnormalities — can be screened for microRNAs that in turn can be a powerful diagnostic tool to assess for potential bone birth defects. Knowing the risks can uncover ways to prevent bone birth defects and help mothers plan how to best care for their babies.”

Outside of research, Sparks is devoted to sharing her passion for science with undergraduates. From experience, she knows that strong mentorship can make a crucial difference in a young person’s career decisions.

“As a Black woman, many times I was ‘the only’ in the program — the only mother, the only Black woman in my cohort,” Sparks said. “My stubbornness helped me to achieve my goals. But we are not all built the same way. It’s easy to feel upset and out of place and to choose a different career path. A mentor who takes you under their wing and gives you a chance is life-changing. My hope is that I can help others who are underrepresented in science to believe in themselves and stay the course.”