Radloff is currently a Metals and mining engineer at Allonnia. 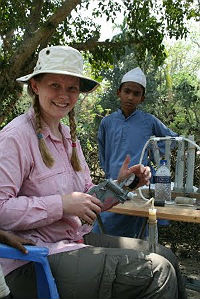 Kathleen Radloff, Ph.D., is the twelfth recipient of the annual Karen Wetterhahn Memorial Award. The award was presented on November 4th, 2009, at the SRP Annual Meeting hosted by the Columbia University in New York, NY. The SRP acknowledged Radloff for her contributions to arsenic mobilization research in aquifers of Bangladesh.

Radloff joined the Columbia University SRP in 2005 and was particularly inspired by the opportunity afforded by the scale of an integrated research program such as the SRP to cross the boundaries that traditionally separate the health sciences, geochemistry, hydrology, and microbiology. According to her research advisor, Alexander Van Geen, Ph.D., "Karrie is always prepared and works very hard, but over the past two years, has matured into a top-notch scientist in the sense that she knows where to direct her efforts most productively."

As an SRP trainee at Columbia, Radloff and her research team found that when water demand in Bangladesh was restricted to household use, the risk of contamination was significantly less than when irrigation water was also pumped from the deep aquifer. Increased pumping of deep groundwater can lead to the intrusion of arsenic-laden water from a shallower aquifer above. Radloff’s research will enable the Bangladeshi government to make better policy and mitigation decisions about water usage from both contaminated and uncontaminated aquifers in Bangladesh and ensure that uncontaminated aquifers remain clean.

Radloff completed her doctorate in Earth and Environmental Engineering at Columbia University. She now works for the private consulting company Gradient as an environmental engineer specializing in the geochemistry, fate, and transport of environmental contaminants. At Gradient, Radloff has used her technical expertise for the characterization of contaminated aquifers, risk-based exposure assessment, site remediation, environmental liability assessment, and litigation support.

The NIEHS congratulates Radloff on her research accomplishments and wishes her continued success in her career.