Congratulations to the 2019 winners of the K.C. Donnelly Externship Award! Jill Riddell, a Ph.D. candidate at West Virginia University working under Dorothy Vesper, Ph.D., is a trainee with the Northeastern University Superfund Research Program (SRP) Center. For her four-week externship, Riddell will travel to Tucson, Arizona, where she will work at the University of Arizona SRP Center under the mentorship of Jon Chorover, Ph.D., a world-recognized soil chemist.

With a Northeastern SRP Center project led by Ingrid Padilla, Ph.D., Riddell's research looks at how organic contaminants, chemicals that are based on carbon such as solvents and pesticides, are transported and stored in karst aquifers. Karst aquifers are formed by water-soluble rock like limestone and dolomite. Due to the water-soluble nature of karst aquifers, they are susceptible to contamination.

At the University of Arizona SRP Center, Riddell will build upon her research to describe how a new tracing technique interacts with karst sediments. Traditional tracing approaches use dyes and salts to mimic how contaminants move through groundwater. However, these tracers fail to mimic the movement of organic contaminants. Riddell will use advanced analytical techniques to better understand polymer microspheres, which are small, spherical particles with molecules attached, and how they can be used as a tracer to model the behavior of organic contaminants.

"As a geologist, the opportunity to continue to diversify my skills and knowledge will give me an advantage in solving complex geologic problems throughout my career," said Riddell. "Through this externship, I hope to build new relationships with scientific professionals. Having an extensive network of colleagues and friends in the scientific community is an invaluable resource." 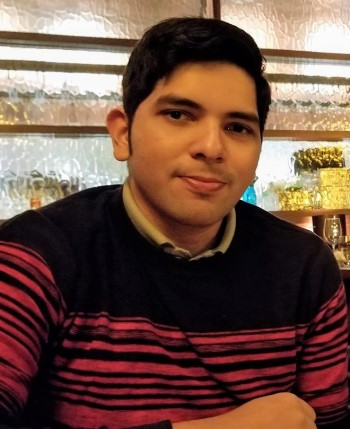 Nabil Shaikh is a Ph.D. candidate at the University of New Mexico (UNM) SRP Center under the direction of Jose Cerrato, Ph.D. During his two-month externship, Shaikh will be traveling to the University of Iowa SRP Center to work with Keri Hornbuckle, Ph.D., and Andres Martinez, Ph.D.

Shaikh's work at the UNM SRP is focused on the cleanup of inorganic contaminants, like uranium, in water. During his externship, he will be learning an advanced technique called electrospinning that creates electrospun nanofiber mats (ENM) with specific chemistry for binding pollutants. He plans to test the ENMs for their ability to capture and remove uranium from contaminated water.

The externship will provide Shaikh with new knowledge of nanomaterials, which can be applied to removal strategies at uranium-contaminated sites in New Mexico. The goal is for the ENMs to reduce risks for communities living near contaminated waste sites.

"The externship will benefit my professional goals of learning new cutting-edge research techniques to become a successful independent researcher," said Shaikh. "It will also help me contribute to developing cleanup strategies that will better protect human health, particularly in rural Native American communities."