The retinoic acid-related orphan receptors (ROR α-γ or NR1F1-3) and the orphan receptor TAK1 (TR4 or NR2C2) are members of the nuclear receptor superfamily of ligand-dependent transcription factors. These receptors exhibit critical functions in regulating embryonic development and many other physiological processes and have been implicated in a variety of pathologies. The ROR and TAK1/TR4 nuclear receptors are targets for endocrine disruptors and drug therapy. Mechanisms of action. The RORs regulate gene transcription by binding as a monomer to ROR response elements (ROREs) consisting of the consensus sequence AGGTCA preceded by a 6-bp A/T rich region in the regulatory region of target genes, whereas TAK1/TR4 homodimers bind direct repeats of AGGTCA spanned by 1-5 nucleotides. The transcriptional regulation by nuclear receptors is mediated through their interaction with co-repressors or co-activator complexes.

Physiological functions. RORs play a critical role in several immune functions. RORα and γ regulate thymopoiesis and innate and adaptive immune responses. RORγ is essential for lymph node development and Th17 differentiation, while RORγ regulates cerebellar development and bone formation. Moreover, RORα,γ and TAK1/TR4 play an important role in the regulation of various metabolic pathways and energy homeostasis. These receptors may play a key role in the interplay between inflammatory and metabolic processes.

Roles in disease. The RORs and TAK1/TR4 have been implicated in a number pathologies, including various autoimmune diseases, asthma, osteopenia, metabolic syndrome, cancer, and autism.

Inflammation and autoimmunity: The RORs and TAK1/TR4 receptors play a key role in regulating various immune responses and inflammation. RORs are essential for Th17 differentiation and interleukin 17 (IL-17) production, which are critical in the development of various autoimmune diseases, but have also been implicated in other inflammatory processes, including asthma. ROR-deficiency greatly reduced Th17 differentiation, the development and severity of experimental autoimmune encephalomyelitis (EAE), and allergy-induced lung inflammation. 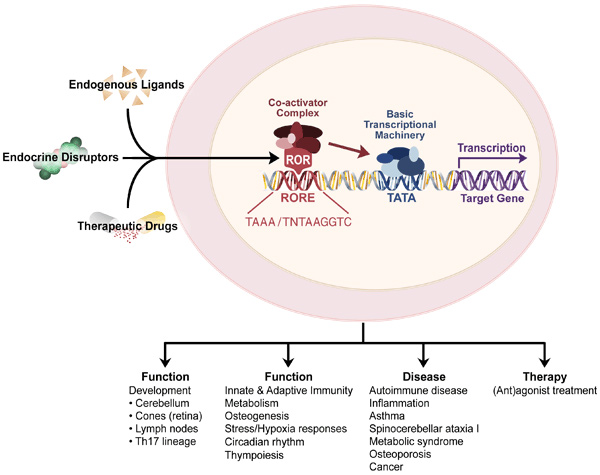 Metabolic syndrome: Deficiency in RORα and TAK1/TR4 greatly decreases the susceptibility to age- and diet-induced metabolic syndrome and inhibits adipose tissue-associated inflammation. These mice are protected from the development of hepatic steatosis and type 2 diabetes. The RORs and TAK1/TR4 nuclear receptors regulate both immunological and metabolic processes and as such might provide a regulatory link between these two processes.

Gene-environment interaction: In addition to natural ligands, endocrine disrupting chemicals can function as ligands for nuclear receptors thereby providing a mechanism by which environmental agents can influence physiological processes and promote disease. Moreover, through their regulation of a variety of metabolic enzymes, RORs and TAK1 can influence the metabolism of xenobiotics and drugs (Phase I and II enzymes), thereby enhancing or abolishing their activities and subsequently affect disease and therapy.

Our research objectives are: