Our laboratory identified a novel subfamily of Krüppel-like zinc finger proteins referred to as GLI-Similar or GLIS, which consists of three related genes referred to as GLIS1, GLIS2 and GLIS3. GLIS proteins are closely related to the GLI and ZIC subfamilies of Krüppel-like zinc finger proteins and share a highly conserved tandem repeat of five C2H2-type zinc finger motifs. These proteins play a critical role in a number of physiological functions and have been implicated in several pathologies.

Mechanisms of action. GLIS proteins bind specific DNA elements—known as GLIS-binding sites (GLIS BS)—in the regulatory region of target genes and function as regulators of gene expression. Evidence is emerging that the GLIS proteins are part of a primary cilium associated signaling pathway and that their activities are regulated by external signals (endogenous signals, drugs, endocrine disruptors). 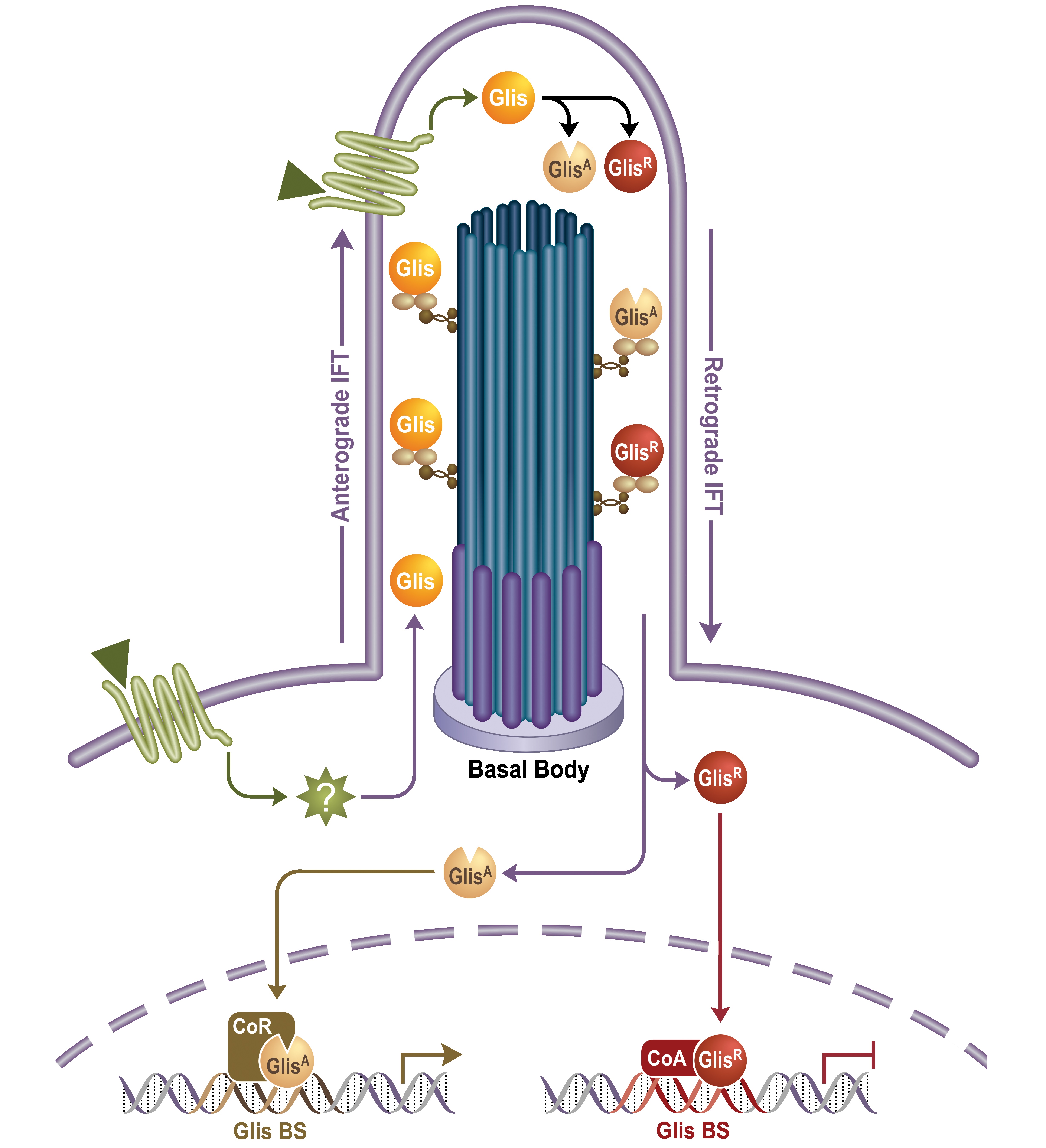 GLIS proteins and disease. Genetic studies in humans and mice by our lab and others have linked genetic changes in the GLIS3 gene to a neonatal syndrome, referred to as NDH, that is characterized by the development of neonatal diabetes, hypothyroidism, congenital glaucoma, hepatic fibrosis, polycystic kidneys, osteopenia, developmental delay, and facial dysmorphism. Moreover, single nucleotide polymorphisms in GLIS3 have been associated with an increased risk of type 1 and 2 diabetes, while overexpression of GLIS3 is associated with several types of human cancers suggesting a role for GLIS3 in cancer development. GLIS3 was found to play a critical role in pancreatic β-cell development and in the regulation of insulin expression. GLIS3 is highly expressed in Type 1 and 2 alveolar cells in the lung, but its function has yet to be identified. Loss of GLIS2 expression leads to nephronophthisis, the most frequent genetic cause of end-stage renal disease among young adults. It is characterized by the development of renal fibrosis, inflammation, tubular atrophy, and ultimately renal failure. The induction of renal fibrosis in GLIS2 deficiency appears to involve epithelial-mesenchymal transition (EMT) of tubule epithelial cells. 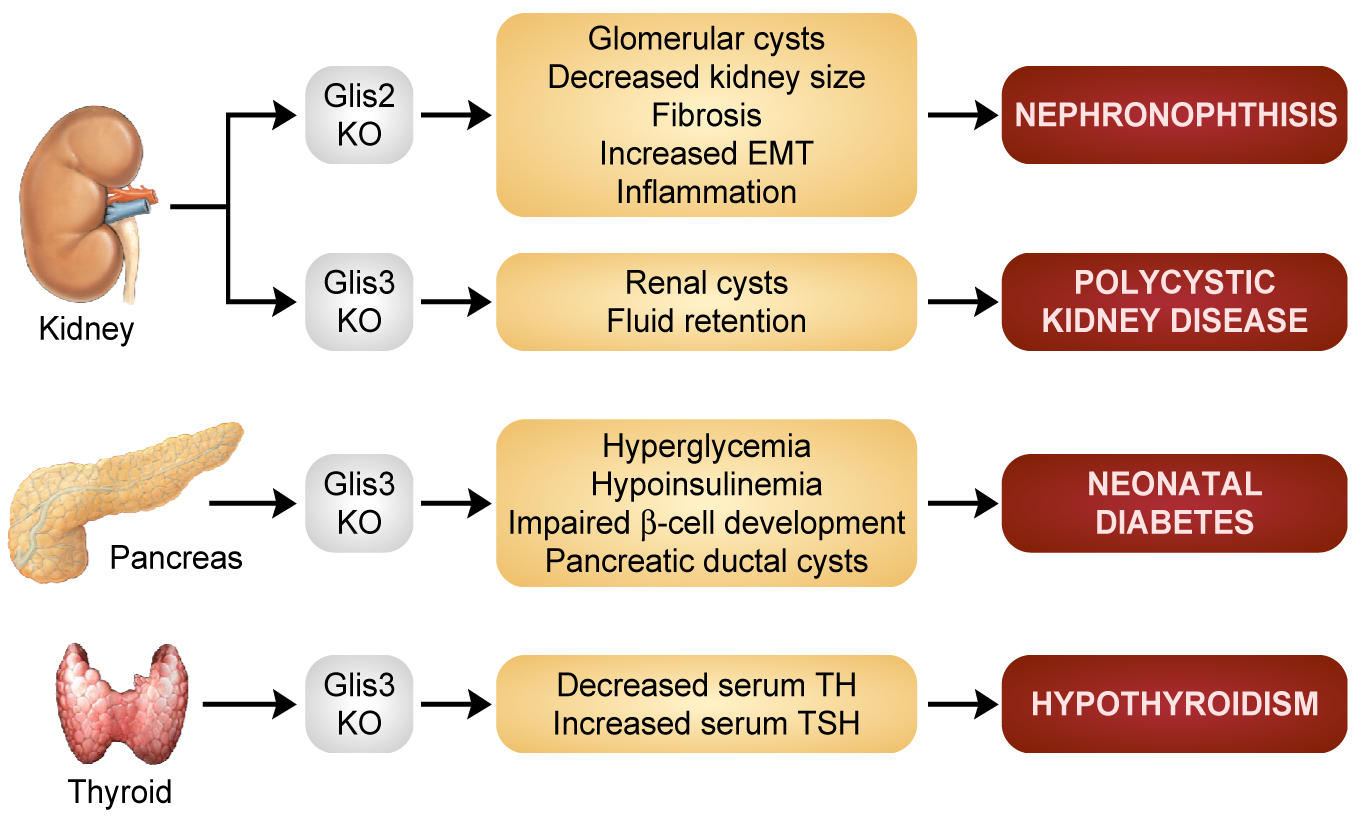 Potential therapy. The critical role that GLIS3 plays in the generation of pancreatic β cells and insulin regulation, in the maintenance of normal renal functions, and in thyroid hormone metabolism may offer several opportunities for novel therapeutic strategies for diabetes, polycystic kidney disease, and hypothyroidism using stem cell-based or drug development-based approaches.

Gene-environment interaction. In addition to genetic predisposition, inactivity, and diet, an increasing number of environmental agents have been reported to enhance the risk and progression of chronic kidney disease and diabetes. Regulation of GLIS activity is mediated through the primary cilium, which acts as a signaling hub for environmental signals. Environmental agents might act on the primary cilium and modulate the activity of GLIS thereby providing a mechanism by which endocrine disruptors can influence physiological processes and promote disease such as cancer, renal disease, and diabetes.

Our research objectives are: