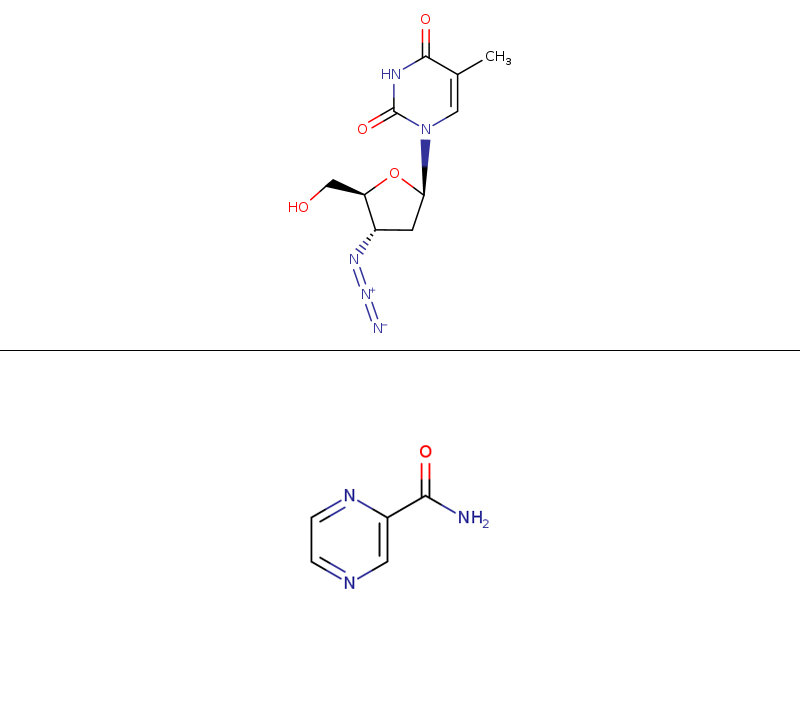 Male and female Swiss CD-1® mice were dosed orally with AZT alone (200 or 400 mg/kg per day), pyrazinamide alone (300, 1,500, or 3,000 mg/kg per day), or combinations of AZT and pyrazinamide. The doses of AZT were equivalent to 2 and 4 times the therapeutic dose in humans, based on body surface area, and the doses of pyrazinamide were 2, 10, and 20 times the therapeutic dose for experimental tuberculosis in mice (Freireich et al., 1966; Grosset et al., 1992; PDR, 1999). Male mice (10 per group) were dosed from day 5 until the day prior to sacrifice on day 25 or 26. Females were divided into two groups designated female-A mice and female-B mice. The female-A mice (20 per group) were dosed from day 0 to the day of sacrifice. They were cohabited with treated males on days 9 to 13 to test for effects of treatment on mating behavior, fertilization, and implantation, and caesarean sections were performed on days 28 to 32. Female-B mice (20 per group) were cohabited with untreated males on days 0 to 4. Sperm-positive female-B mice were dosed during organogenesis on days 6 to 15 of presumed gestation and sacrificed on day 4 of lactation. A summary of the most significant toxicological parameters is presented in Table 1.

Biologically significant declines in body weight were only evident in female mice. Terminal body weights and gravid uterine weights were diminished in female-A mice treated with AZT alone and AZT plus pyrazinamide. Corrected body weights, however, were similar to those of the controls. A slight decline in gestational body weight occurred in female-B mice treated with the highest combination of both drugs. Significant alterations in mortality, clinical chemistry parameters, and necropsy findings were not evident in any treated female groups. Biologically significant alterations in hematology parameters did not occur in any of the female-B treatment groups.