Today, Martin is an NIH Independent Research Scholar in the Epigenetics and Stem Cell Biology Department at NIEHS. 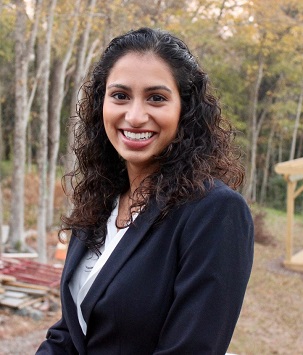 Elizabeth Martin is the 19th recipient of the annual Karen Wetterhahn Memorial Award. The award was presented on December 5 at the Superfund Research Program (SRP) meeting held during the NIEHS Environmental Health Science FEST in Durham, North Carolina.

Each year, this award recognizes one outstanding SRP graduate student or postdoctoral researcher who exemplifies certain qualities of scientific excellence. Martin, who is pursuing her Ph.D. at the University of North Carolina (UNC) under UNC SRP Center Director Rebecca Fry, Ph.D., was recognized for her cutting-edge research to understand the epigenetic mechanisms underlying the negative health effects associated with exposure to metals.

"As a native North Carolinian, my commitment to understanding the health effects of toxic metals was fueled by the Dan River spill," Martin said. "These metals are impacting the lives of individuals not only in North Carolina, but around the globe. My research as an SRP trainee integrates environmental and ‘omic' datasets to identify targets for novel disease prevention strategies."

Martin aims to address two critical knowledge gaps in public health: (1) how the epigenome mediates the health effects of toxic metals and (2) how disease risk is influenced by differences in metal metabolism between individuals. So far, her research as an SRP trainee has generated 12 publications, including one presenting support for her original hypothesis that describes how environmental contaminants cause specific DNA methylation patterns in certain genes.

"This is an entirely novel hypothesis in the environmental epigenetics field. It is truly game-changing as it begins to explain how certain regions of the genome are targets of epigenetic modification as a result of environmental exposures," Fry said of Martin's work. "Her impressive publication record for such a young scientist is a testament to her drive and scientific acumen – there is no doubt that she will continue to be an outstanding leader in environmental health sciences."

Outside of the lab, Martin is actively involved in scientific communication and outreach. She participates in community engagement efforts, particularly with youth and their families, educators, and underserved communities. She also mentors undergraduate and graduate students to encourage women and minority students to pursue scientific degrees. Martin strives to serve as a mentor for the next generation of female scientists of color and to encourage diverse individuals to pursue careers in science and environmental health.

Martin plans to continue her research to understand how person-to-person differences in metal metabolism affects disease risk. After completing her degree, she plans to continue in academia to investigate diverse environmental health issues with population-based multi-disciplinary studies. "As I continue in my career, I plan to focus on working in underserved communities to promote scientific advancement, education, community empowerment," Martin said.

NIEHS congratulates Martin on her accomplishments and wishes her continued success in her scientific career.