Killifish populations have adapted to survive and reproduce in polluted waters. Researchers have studied the evolutionary and genetic basis for this adaptation, discovering that it comes with a cost. 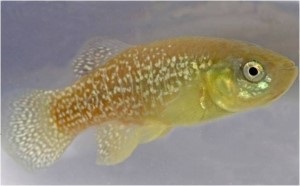 PAHs and PCBs pollute air, water, and soil, and are linked to health problems in humans. The chemicals do not dissolve easily in water, but instead stick to solid particles and settle to the bottom of rivers, lakes, and estuaries. 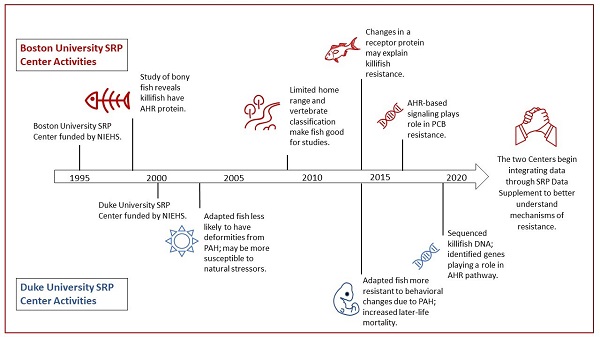 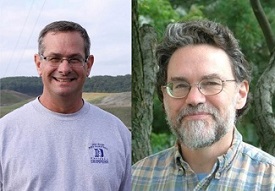 Richard Di Giulio, Ph.D., leads a Duke University SRP Center project focused on understanding the mechanisms and consequences of killifish adaptation to PAHs. His early studies explored how fish adapt over many generations and sought to understand whether adaptation was inherited through genes.

Mark Hahn, Ph.D., senior scientist at Woods Hole Oceanographic Institution (WHOI) in Massachusetts, leads a similar project at the Boston University SRP Center on the mechanisms and impacts of PCB resistance in the fish. Like Di Giulio, his studies focus on the genetic basis for adaptation.

Evolution and Cost of Adaptation

Di Giulio examined whether resistance to PAHs was passed down through many generations. In an early study, his group compared fish from the polluted Elizabeth River with fish from non-polluted rivers and monitored their offspring for two generations. In the lab, Di Giulio’s team exposed the fish to contaminated sediments from the Elizabeth River. The two generations of offspring from the contaminated site were more resistant to PAHs and more likely to survive than those from the non-polluted site. Elizabeth River offspring were also less likely to have heart deformities, tail deformities, and other morphological issues resulting from PAH exposure than fish from a clean estuary in Virginia. 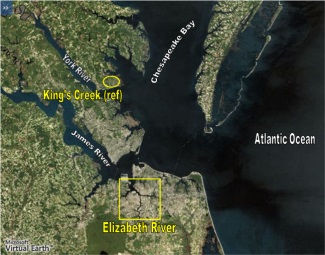 The Elizabeth River site is shown in the rectangle at the bottom of the map, with the non-polluted King’s Creek located to the north.
(Photo courtesy of Duke SRP Center)

Interestingly, fish resistant to PAHs were more sensitive to natural stressors like phototoxicity and low oxygen. Phototoxicity, an increased sensitivity to sunlight due to the presence of a chemical, caused skin lesions in some adapted killifish. While killifish are known to tolerate a wide range of dissolved oxygen levels, adapted killifish were more sensitive to low levels of oxygen. The results point to an evolutionary tradeoff between adaptation and fitness.

More recently, Di Giulio and his team examined the role of early life exposure in killifish behavior . Non-adapted killifish exposed to contaminated water from the Elizabeth River as embryos showed altered locomotion and behavior later in life. Adapted killifish exposed as embryos behaved typically. However, exposure level played a role, as water with lower levels of contaminants did not affect behavior of non-adapted fish in the long-term.

According to the authors, because adapted killifish evolved with Elizabeth River sediment, the sediment might be protective. That is, it might keep fish healthy by regulating bacteria and parasite populations, and even influencing the gut microbiome.

Similar to the earlier work, the researchers uncovered physiological and survivorship costs of adaptation. For example, the researchers found that when raised in unpolluted water in the lab, adapted embryos faced higher mortality in the long-term. 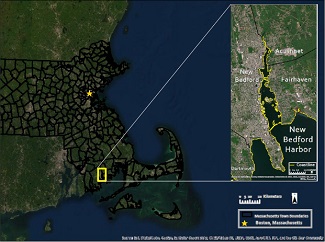 New Bedford Harbor is showed in the yellow box on the map of Massachusetts.
(Photo courtesy of Map courtesy of Boston University SRP Center)

Killifish from the polluted New Bedford Harbor had different genetic variations than killifish from non-polluted sites. The researchers hypothesized that the variants in adapted fish may create a nonfunctional AHR protein. With the AHR pathway turned off, PCBs can no longer activate the protein to alter the gene expression and function of cells that typically leads to toxicity. According the researchers, AHR is likely an important genetic target driving PCB resistance.

Subsequent to these findings, Hahn collaborated with WHOI biologist Sibel Karchner, Ph.D., University of California, Davis researchers Andrew Whitehead, Ph.D. and Noah Reid, Ph.D., to sequence the genomes of almost 400 killifish. The genome wide study, which involved four groups of fish from polluted sites and four groups of fish from non-polluted sites, examined which parts of the genome were under selection. The results led the researchers back to the AHR pathway.

The team found genetic hotspots, or places in the genome that appeared to undergo natural selection in the pollution-resistant fish. The strongest hotspots appeared in all four groups of fish from polluted sites and included genes involved in the AHR signaling pathway. These findings strengthen the link between contaminant adaptation and genetic variation in AHR, according to the researchers.

In a similar study, Di Giulio’s group sequenced adapted and non-adapted killifish DNA from the Elizabeth River and a non-polluted site. They identified eight places in the genome with unique variations in the adapted population. Like Hahn, Di Giulio’s lab identified genetic adaptation related to the AHR pathway, suggesting reduced AHR activation in response to PAHs protects against toxicity.

By studying killifish, researchers can learn more about chemical toxicity in humans. Both killifish and humans are vertebrates, and both utilize AHR pathways. Previous studies in mice, birds, and some fish show that variation in the AHR protein itself can control sensitivity to dioxin-like chemicals such as PCBs. Genetic variation in AHR in humans exists, but it does not fully account for differences in chemical susceptibility or resilience. In their studies, Hahn and Di Giulio found that other genes encoding proteins in the AHR pathway may contribute to variations in sensitivity, and the same could be true for humans.

Not only do the Atlantic Wood and New Bedford Harbor Superfund sites provide a living laboratory for research, they also provide opportunities for connecting with communities and taking part in cleanup activities.

The Duke SRP Center works alongside federal and state agencies and nonprofit organizations to restore the Elizabeth River. The river is undergoing extensive restoration of its habitats and wetlands. Emphasis is placed on increasing public awareness of evolution and preventing future inputs of contaminants.

The Boston University SRP Center’s Community Engagement and Research Translation Core helps community organizations understand and address exposures to chemicals in the New Bedford Harbor. One of these community organizations, Hands Across the River (HARC), requested the Center’s assistance in understanding health concerns and strengthening their cleanup initiatives. The Center has also helped connect HARC with legal advice and other expertise to support cleanup efforts.

Hahn and Di Giulio joined forces and received an SRP data supplement to collaborate on integrating their genomic data to better understand mechanisms of susceptibility and their inheritance.

With the supplement, the researchers will integrate the Hahn team’s whole-genome data for 384 killifish with Di Giulio’s sequenced genome samples from 270 fish. Initial analyses of data from both projects identified variation in the AHR signaling pathway as a common feature associated with pollution resistance. They will also integrate datasets showing genetic variation in rodent and human models.

The team is making data available on the open-source genome browser, JBrowse. In the long-term, they hope that creating archives of publicly accessible data will allow researchers to link killifish data with animal and human data to look for similar genes across species, which could help further explain genetic susceptibility to hazardous substances.