What Does the NIEHS Collaborating Centre Do?

In September 2017, NIEHS was redesignated as a WHO Collaborating Centre, and a new workplan concentrating on four focus areas of collaborative effort was established:

Included in the 2017 work plan are cross-cutting themes—subjects that touch on more than one focus area—such as e-waste, indoor air pollution, and the developmental origins of health and disease (DOHaD). NIEHS is also expanding its work in emerging health areas, such as chronic kidney disease of unknown origin (CKDu).

Extensive research into children’s environmental health at NIEHS has increased understanding of the unique vulnerability of children to harmful environmental exposures and helped to guide the development of protective measures for children in the United States and around the world. 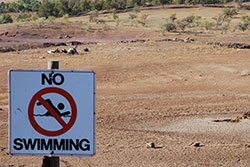 In 2018, WHO Director General Tedros Adhanom Ghebreyesus, Ph.D. declared that climate change was already having a serious impact on human lives and health. “It threatens the basic elements we all need for good health—clean air, safe drinking water, nutritious food supply and safe shelter,” he said, “and will undermine decades of progress in global health. We can’t afford to delay action any further.”

NIEHS works with WHO to increase awareness of the link between climate change and human health and to help inform health ministries and health professionals around the world about how to protect people from health threats related to climate change.

The new NIEHS WHOCC workplan includes a focus on educating health professionals and further collaboration on health system resilience in the face of climate change. 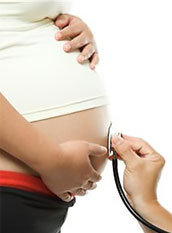 Over the past several decades, the global burden of disease has been shifting from mostly communicable to non-communicable diseases. Non-communicable diseases (NCDs) now cause 60% of all global deaths. Most major global health interventions for NCDs focus on changing lifestyles and adult behaviors. NIEHS research is building understanding of how environmental insults early in life (from conception through early childhood) can impact health and disease risks, not just later in childhood but decades later into adulthood. Included in this focus area are a number of cross cutting environmental health issues where NIEHS is active.

There has been a significant increase in the global burden of chronic kidney diseases of unknown origin. CKDu is increasingly recognized in specific geographic or agricultural regions in both Central America and South Asia. NIEHS is working with WHO and WHO regional offices around the world to explore current research, possible exposures, outcomes and to help understand this terrible disease.

Developmental Origins of Health and Disease

Studies suggest that harmful exposures that occur early in life, while tissues and organs are developing, increase the risk of disease later in life. Sometimes these risks carry over into future generations. This concept is called the developmental origins of health and disease, or DOHaD. As a founding member of the U.S. DOHaD society, NIEHS funds research into this important topic and is actively engaged with international partners to better understand the impacts of early life exposures. 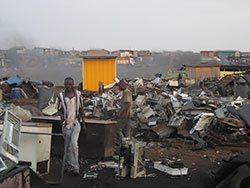 It is becoming increasingly important to understand how exposure to the growing amount of global e-waste affects human health. Electronic devices, such as computers, cell phones, and televisions, contain a variety of metals and chemicals that can harm health not only for people recycling devices and extracting raw materials, but also for those living near these recycling efforts. NIEHS works with WHO to raise understanding of the importance of controlling exposures to e-wastes among health practitioners and decision makers and to better understand effective methods to prevent harmful e-waste exposures. 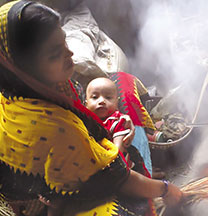 An estimated 3 billion people use biofuels, such as dung, brush, and wood as their main source of energy for cooking and heating. Exposures to smoke from burning biomass cause nearly 4 million deaths per year, as well as other chronic health problems, including eye diseases and COPD. Women and young children are disproportionately affected by this pollution. NIEHS and WHO are partnering to raise awareness about the urgency of reducing exposures to household air pollution by promoting research and implementation science that can lead to improved cookstoves and effective fuel and stove replacement programs around the world.

NIEHS provides support to organizations such as the Clean Cooking Alliance and other participants in the Household Air Pollution Intervention Network (HAPIN) Trial, whose working group is co-chaired by the director of NIEHS. The HAPIN study tests the viability of improving household pollution through the increased use of liquified petroleum gas stoves.

More than 25% of the global burden of disease is thought to be linked to environmental factors. In an effort to better evaluate and minimize exposure to toxic chemicals, WHO created the WHO Chemical Risk Assessment Network in 2013. Its first meeting, held in Paris in 2014, was supported by NIEHS.

The network aims to bring together representatives of government agencies, academics and researchers, and nongovernmental organizations to address the public health risks posed by chemicals. Network participants collaborate on projects across borders, provide a platform to disseminate new findings and support the development of training focused on chemical risk assessment.