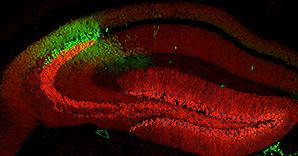 Serena M. Dudek, Ph.D., is Deputy Chief of the Neurobiology Laboratory, head of the Synaptic and Developmental Plasticity Group, and holds a secondary appointment in the NIEHS Epigenetics and Stem Cell Biology Laboratory. The Synaptic and Developmental Plasticity Group studies the regulation of synaptic effectiveness and how synaptic changes early in development are consolidated to last a lifetime.

During postnatal development, mammals, including humans, acquire vast amounts of information by interacting with their environments. In contrast to creatures having nervous systems that are fully pre-wired at birth, mammals benefit from an enormous flexibility in behavior due to the driving force of experience on their brain development. This flexibility comes at a potential cost, however, because interaction with noxious or otherwise abnormal environments can cause lasting and often deleterious changes in brain circuitry. Using patch clamp and extracellular recordings in brain slices, confocal microscopic imaging, and molecular and cellular techniques, the group aims to determine how the connections in the brain (synapses) change in response to neuronal activity, what regulates the critical periods of postnatal development when such plasticity is most robust, and why some brain regions are more plastic than others. This research should bring a better understanding of how environmental factors play a role in forming the circuitry of the brain so that the associated problems of brain disease caused by toxicant exposure can then begin to be addressed.

Dudek received her Ph.D. from Brown University where she had completed seminal work on long-term synaptic depression with Mark Bear. Following postdoctoral work with Michael Friedlander and Gail Johnson at the University of Alabama at Birmingham, she joined the laboratory of Doug Fields at the NICHD. Dudek moved to NIEHS to head the Synaptic and Developmental Plasticity Group in 2001.