The DNA Repair & Nucleic Acid Enzymology Group has made a number of contributions over the years to the understanding of mechanisms of DNA synthesis and, in particular, synthesis by the repair enzyme DNA polymerase β (Pol β). They identified the kinetic mechanism of this enzyme, its primary and 3 dimensional structures, and its biological roles in base excision DNA repair. This DNA repair pathway protects cells against endogenous DNA lesion including single-strand breaks.

In 1996, the group demonstrated that Pol β "knock-out" mouse fibroblast cell lines are deficient in DNA repair and in cellular protection against DNA damaging agents, thus establishing a cellular role for this enzyme. In 1985, the group discovered the amino acid sequences of human and rat Pol β through cDNA cloning; this was the first such cloning success for any of the mammalian DNA polymerases. The group developed a strong recombinant expression system for the enzyme and then went on to obtain the first crystal structure of a DNA polymerase ternary complex: Pol β complexed with its substrates, DNA and correct incoming dNTP-Mg2+. The group proposed an "induced-fit mechanism" for explaining how DNA polymerases recognized a correct incoming dNTP. Their hypothesis emphasizes conformational changes when a correct incoming nucleotide is positioned in the polymerase active site opposite the templating base. These conformational changes trigger chemistry; the group demonstrated that alteration of key amino acid side chains cripples Pol β so that it no longer catalyzes DNA synthesis efficiently and does not discriminate between correct and incorrect incoming nucleotides. The group is now studying mechanisms of chemically-modified nucleotide incorporation by the enzyme, along with mechanisms of metal activation.

The group and collaborators have reported many crystal structures of complexes of rat and human DNA polymerases beta with the two substrates (DNA and dNTP), and have solved the NMR structure of the enzyme’s 8 kDa domain that contributes lyase activity in the base excision repair pathway. This work has improved understanding of the fundamental mechanism of DNA synthesis and of the phenomenon of templating. The group also studies cellular signaling of DNA damage, as the base excision repair machinery interfaces with cell cycle and cell death signaling.

Finally, the research program also includes studies of structure-function relationships of the HIV-1 Reverse Transcriptase. The group and collaborators have conducted kinetic studies of enzyme-nucleic acid interactions. The information from this work provides a framework for drug design and for biochemical analysis of the relationship between the structure of the reverse transcriptase and its functions. 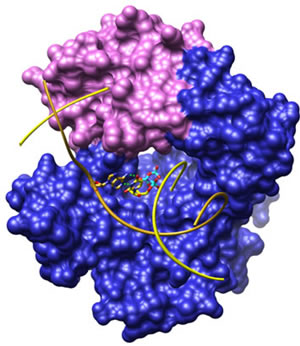