Children and infants are especially vulnerable to pollution and other environmental factors that may cause serious health problems. There are several reasons why children are at higher risk:

Doctors and scientist do not always know what causes a disease or a disorder. Some health conditions are genetic and can be passed from grandparents to parents to children. Some health problems may be caused by injury from things in our environment. Most scientists agree that diseases are probably caused by both, which is called the gene-environment interaction. Since we cannot do much to change our genes, researchers believe that identifying and managing environmental hazards offers the best hope for prevention.

By protecting children, we may also improve their health as adults. According to NIEHS research, when pregnant women improved their nutrition and reduced exposure to environmental chemicals, they were more likely to have healthy babies, and their babies were better able to cope with environment stressors later in life. 1

Children’s environmental health research is a priority for NIEHS funding and research-support activities. NIEHS has invested more than $1 billion in the past 10 years, including $100 million awarded in grants to researchers each year. NIEHS’ research focuses on the following areas.

Chemicals and childhood cancer – Research shows vitamins or folic acid taken by women before conception or during pregnancy reduced the risk of their children developing certain types of leukemia. 2

Environmental exposure and vaccine response – NIEHS-supported research found that exposure to common pollutants that persist in the environment, such as DDT and polychlorinated biphenyls (PCBs), may diminish infants’ immune response to mount a proper immune response after other vaccinations. 3 Other NIEHS-funded researchers have found that higher arsenic exposure in school-aged children in rural Bangladesh also have an altered immune response, and a decreased response to the mumps vaccine. 4 Autism and children’s exposure – NIEHS-supported research linked genetics and air pollution exposure during pregnancy to increased risk of autism spectrum disorder (ASD). 5 , 6 Other NIEHS-funded researchers discovered pregnant mothers exposed to pesticides or experiencing inflammation from ailments such as infections, diabetes, or obesity also have a higher chance of having a child with ASD. 7 , 8

Air pollution and children’s health – One study, funded in part by NIEHS, reports links between prenatal exposure to air pollution and subsequent effects on children’s brain structures, as shown by brain imaging with MRI technology. 11

Asthma and allergies – Scientists are still researching what may initially cause asthma. In one study, infants living in homes with high levels of mold from water-damaged buildings were more likely to develop asthma by age seven. 12 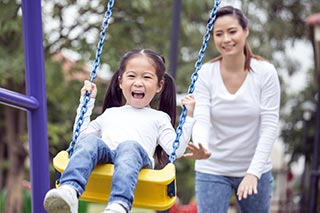 E-Waste and health – NIEHS researchers study the effectiveness of recycling discarded electronic waste globally to reduce both exposures to harmful substances and health problems in pregnant women and children. 13

National Toxicology Program (NTP) studies on crumb rubber – The health risks of crumb rubber are unknown. Crumb rubber is found in artificial turf, a common play surface. It can cling to clothing, hair, and skin, and may be swallowed due to its small size. The NTP conducted preliminary research as groundwork for future health studies, and found:

The NTP studies did not assess the health effects of long-term exposure to crumb rubber, nor did they evaluate carcinogenicity of crumb rubber chemicals.