What is hydraulic fracturing? 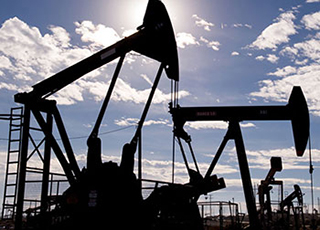 Hydraulic fracturing, or fracking, is a method used to extract natural gas and oil from deep rock formations known as shale. Using this method, drilling operators force water, sand, and a mix of chemicals into horizontally drilled wells, causing the shale to crack and release natural gas or oil.

Hydraulic fracturing is one part of a broader process known as unconventional natural gas development, which refers to all operations associated with fracked wells, from well construction to the transport of gas and oil off the site.

Does hydraulic fracturing pose health risks to the people living near drilling sites?

Although research is underway, few studies to date have provided conclusive evidence about how unconventional natural gas development affects the health of nearby communities. Residents, environmental advocates, and some researchers have expressed concerns about potential health effects and environmental impacts on water and air in their communities.1, 2

Hydraulic fracturing, or fracking, is just one part of the unconventional natural gas development process.

More than two decades since the rapid expansion of unconventional natural gas extraction, researchers are now beginning to grasp the scope and extent of associated health effects and related costs. Mounting evidence related to environmental effects shows a need to analyze and quantify health and socioeconomic impacts using a common metric.

In some cases, it may be possible for natural gas and hydraulic fracturing-associated chemicals to travel through cracks in the rock into an underground drinking water source. Water contamination could also occur if a well is improperly installed, if chemicals are spilled from trucks or tanks, or if flowback is not effectively contained. Flowback is when water used in the hydraulic fracturing process flows out of the well. The extent of water contamination from these sources is currently unknown.

Drilling sites can potentially affect local air quality in several ways. First, any process involving combustion can release toxic chemicals into the air. For example, the burning off, or flaring, of excess natural gas; the operation of heavy equipment at the well site; and the use of diesel trucks to transport materials to and from a site may all contribute to air pollution. In addition, the chemicals and sand used in the hydraulic fracturing process, as well as other chemicals that surface with the natural gas, may potentially become airborne and affect air quality. 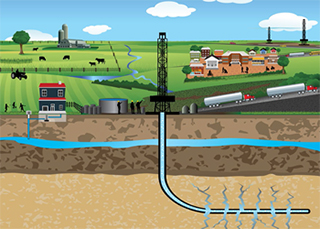 Since operators are not always required to divulge the specific chemicals used, the extent of air pollution and the potential dangers to local communities are not well understood.

The changes associated with building and having a drilling site can have numerous impacts on community well-being. Some of these impacts may be positive. For example, a drilling operation can increase local employment rates, and result in greater access to health care. Drilling-associated activities, and a sudden influx of a large transient workforce, can also have negative impacts on a community. These may include increased noise, light, and traffic; heavier burdens on local infrastructure and resources, such as roads and hospitals; higher rates of crime and substance abuse; and changes to community character.

Are there health risks to the people who work at drilling sites?

Most of what is known about the health risks from unconventional natural gas development comes from studies of workers at these sites. While studies of worker exposures and health are limited, ongoing efforts continue to gather important insights. Currently, three hydraulic fracturing-specific health risks have been identified, in addition to risks, such as accidents, that are often associated with industrial occupations involving the use of heavy equipment.

NIEHS provides funding for research and community outreach, to investigate and address potential health impacts related to hydraulic fracturing. Some ongoing activities include the following: