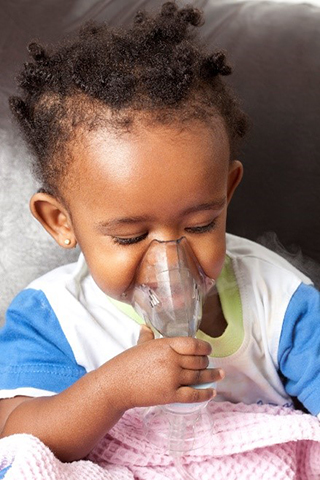 Air pollution affects an individual’s health in a variety of ways. The effects of air pollution can be seen in the young and old as well as the healthy and sick.

With both outdoor and indoor sources, air pollution is a health issue with global consequences. NIEHS works to understand how air pollution is associated with disease and how to prevent or reduce harm from exposures.

Air pollution is linked to health problems in the respiratory, cardiovascular, reproductive, neurological, and immune systems. For example, people with asthma can have difficulty breathing if air pollution is high, and prenatal and early childhood air pollution exposure is linked with neurobehavioral problems. Long-term exposure can cause cancer, and, more recently, scientists have discovered associations with obesity and diabetes.

What NIEHS Is Doing

NIEHS-funded researchers study the biological mechanisms that lead to and exacerbate diseases linked to air pollution exposure. They examine the role air pollution plays in the development of various diseases, biological effects on the body, and groups who are most susceptible.

Researchers also study the combined effects of air pollution and other factors in the indoor and outdoor environment.

NIEHS research provides a sound scientific base for the development of stricter air quality standards by regulatory agencies while also contributing to the identification of new risks. As research in this area advances, it continues to inform public health interventions, including regulatory actions, to improve health and protect quality of life.

Gas stoves and heating units can contribute indoor pollutants, such as nitrogen dioxide. Mold, tobacco smoke, pet dander, and pest allergens can cause or exacerbate health problems. Many outdoor air pollutants can penetrate the indoor environment and accumulate, especially if buildings have poor ventilation.

NIEHS funds research on the health effects of indoor air pollutants found in homes as well as the workplace, such as pesticides, ultrafine particles, nanoparticles, and fumes from industrial chemicals.

To better understand the effects of air pollution, especially as individuals move between indoor and outdoor environments, researchers develop technologies to measure and collect data on personal exposures to understand when and where they occur. They also consider factors such as a person’s activity levels, which could increase inhalation of pollutants and bring about deeper deposition in the lungs.

This work contributes to NIEHS efforts to measure all the exposures a person experiences during their lifetime, a concept known as the exposome. 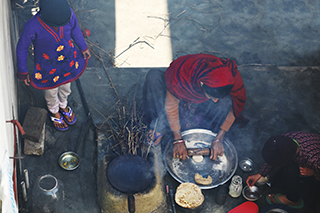 While all air pollution problems have a global nature, NIEHS also focuses on health problems associated with open fires and traditional cookstoves that burn solid fuels, such as wood, crop waste, or dung. About 3 billion people around the globe – nearly half the world’s population – rely on open fires and traditional stoves for cooking. The smoke from these cooking methods can contain high levels of health-damaging pollutants such as fine particles and carbon monoxide. NIEHS funds research on cookstoves and their health effects in Ghana, Nepal, Peru, and Nicaragua, among other countries. Scientists are also testing interventions involving less-polluting stove designs and proper ventilation.

NIEHS supports research on the health effects of ambient air pollution in India and China by participating in a NIH-wide program. Recently NIEHS, in collaboration with the Indian Council of Medical Research, initiated joint efforts to stimulate and promote collaborative basic, translational, and clinical research between U.S.-based researchers and Indian researchers in environmental health, including ambient air pollution.

Another global factor affecting air pollution is the changing global climate, and the heat waves and droughts that come with it. NIEHS-funded scientists study how climate influences health effects from air pollution.

For additional information on the work of NIEHS grantees, visit our Who We Fund tool.