An innovative technology, developed with funding from the NIEHS Superfund Research Program (SRP), successfully delivers amendments that immobilize and degrade polychlorinated biphenyls (PCBs) in aquatic environments. The technology has proven effective in the field and resulted in millions of dollars in estimated cost savings at cleanup sites.

PCBs are a large and complex group of chemicals that were used in insulation, coolants, and electrical equipment. Although commercial production of PCBs was banned in the United States in 1979, they persist in the environment because of their stable chemical structure. PCBs can also accumulate in the aquatic food web, where they can pose a threat to human health.

SediMite, developed by Upal Ghosh, Ph.D., of the University of Maryland, Baltimore County, and collaborators, uses activated carbon in the form of specialized pellets to bind to PCBs and reduce their bioavailability, or uptake by fish and other aquatic organisms. The technology can also be combined with microbes that break PCBs down, reducing their toxicity. 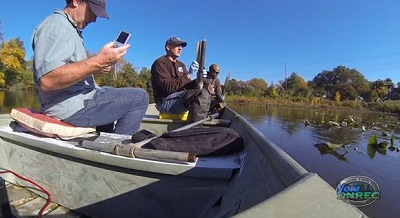 Ghosh, right, and colleagues collect sediment samples to measure PCBs. (Image from the DNREC YouTube video highlighting the work at the Christina River)

Documenting Effectiveness in the Field

In a new study, Ghosh and his team collaborated with the Delaware Department of Natural Resources and Environmental Control (DNREC) to use the technology at Mirror Lake. They demonstrated that between 2013 and 2018, PCB concentrations in sediment porewater decreased by about 80% after applying SediMite. They also measured a 70% reduction in PCB levels in the lake’s fish.

Their success has important implications for human health because PCBs are the primary drivers of fish consumption advisories issued by DNREC and the Delaware Division of Public Health. 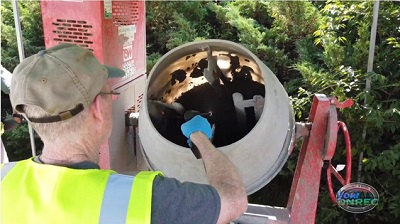 Building on these promising findings, DNREC used an enhanced version of the SediMite technology in a new project to reduce PBCs in the Christina River. Ghosh and colleague Kevin Sowers, Ph.D., combined the activated carbon with microorganisms that can break down PCBs to both immobilize PCBs in the sediment and degrade them over time. After only five months, SediMite enhanced with PCB-degrading microbes reduced the amount of PCBs in the sediment by approximately 25%. PCB concentrations decreased by around 35% in the surface water and 64% in sediment porewater.

The successes at Mirror Lake and the Christina River were featured in videos developed by DNREC. With increasing confidence in these innovative approaches, the DNREC plans to conduct larger projects throughout Delaware.

The technology builds on years of sustained research by Ghosh and colleagues. SediMite was initially developed in part with SRP funding in an early project focused on optimizing the delivery method to apply activated carbon pellets to contaminated sites.

Ghosh had previously collaborated with Richard Luthy, Ph.D., an SRP  grantee at Stanford University, to develop the novel concept of amending sediments with sorbents to reduce pollutant bioavailability. Their initial studies resulted in a method, patented in 2006, to stabilize persistent organic contaminants using carbon as sorbents and laid much of the groundwork for identifying potential barriers and future research needs to make the technology a viable reality, including the need for efficient methods to deliver the sorbents to sediment.

Ghosh then collaborated with Charlie Menzie, Ph.D., to develop SediMite to efficiently deliver amendments to sediments through a U.S. EPA Small Business Innovation Research program grant. Initial pilot-scale tests demonstrated that it was a feasible technology for use in the field. With SRP funding, the researchers scaled up their method to deliver activated carbon pellets from the lab to the field and patented SediMite in 2010. 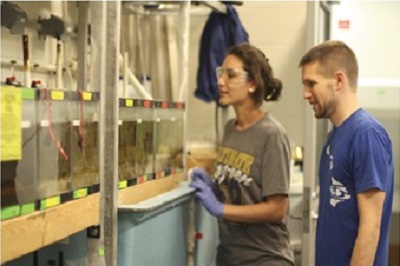 Ghosh continued his research in a second SRP-funded project aimed at evaluating how activated carbon reduces PCB uptake in fish. The team used lab studies and modeling approaches to demonstrate that activated carbon can reduce PCB uptake in fish by as much as 87% after 90 days of treatment. They also showed that SediMite decreased the assimilation efficiency of PCBs by up to 93%. Assimilation efficiency measures the amount of the contaminant that remains in the body compared to the amount that is excreted. This early work included scaling up their results to the field study at Mirror Lake.

The technology was implemented in full-scale to remediate a 5-acre lake in Dover, Delaware in 2013. It was also selected as a component of the cleanup strategy for a contaminated sediment site in Middle River, Maryland, where the approach was estimated to cost approximately $22 million less than traditional methods.

The successful field trial at the Christina River and the new SRP SBIR award represent a synergy between Ghosh’s development of SediMite and Sower’s early SRP-funded project to identify PCB-degrading microorganisms and how to best use them to clean up PCB contamination. Sowers and his team demonstrated that using specific microbes and conditions to stimulate them resulted in 80% of PCBs being degraded in Superfund sediments under realistic conditions.

While Ghosh, Sowers, and colleagues developed and patented methods for growing PCB-degrading microbes, adding them to activated carbon pellets, and delivering the pellets to sediments, they identified some limitations to large-scale application of the technology. The team, led by Craig Amos, of RemBac Environmental, was recently awarded a Small Business Innovation Research (SBIR) grant from SRP to address these limitations.

Specifically, they will use the new grant to test methods to optimize growing and storing large volumes of PCB-degrading organisms over time. They will also develop and test methods to more uniformly and cost-effectively apply the microbes to high volumes of activated carbon pellets. The researchers anticipate that these advances will facilitate scaling their technology up to broader commercial use.