Douglas A. Bell, Ph.D., heads the Environmental Epigenomics and Disease Group and holds secondary appointments in the NIEHS Epigenetics and Stem Cell Laboratory and the NIEHS Genome Integrity and Structural Biology Laboratory.

The Environmental Epigenomics and Disease Group works to characterize underlying factors that contribute to variability in human toxicological responses. We especially focus on discovery of human alleles and epigenetic factors that mediate responses to exposure and we investigate how such factors affect risk in exposed people. This basic information will be useful for understanding variability in human risk estimation models, and potentially, for identifying at-risk individuals and devising disease-prevention strategies.

Having uncovered the genetic basis for several susceptibility phenotypes in carcinogen metabolism, the group has developed high-throughput genotyping assays and worked with epidemiologists to further explore the gene-environment interaction component of exposure-induced disease. Several genotypes affecting carcinogen metabolism and DNA repair have been identified as susceptibility factors in environmentally-induced disease. The group’s gene-environment interaction studies on polymorphisms in GSTM1 (Bell et al., 1993) and N-acetyltransferase (Taylor et al., 1998) in bladder cancer have been highly cited.

The NIEHS Environmental Genome Project, the 1000 Genomes Project and Roadmap Epigenome Project have uncovered millions of sequence variants and epigenetic features in the human genome. However, relationship between these factors and transcriptional response to environmental stress is still unclear and methods for studying this are not established. The Environmental Epigenomics and Disease Group has developed novel methods that identify SNPs and DNA methylation changes in environmentally responsive enhancers (Figure 1) and have evaluated functional impact on transcription factor binding (Figure 1a, b), single cell gene expression and cellular phenotype. Thus, the group’s overall objective is to identify factors that modulate exposure responses and to evaluate their roles in human susceptibility to environmentally-induced disease using a variety of functional approaches.

Epigenetics is the nongenetic transmission of information encoded in methyl-CpGs, histone modifications or microRNAs, from parent cell to daughter cells and from one generation to the next. Epigenetic factors such as chromatin state may modulate the impact of exposure, or conversely, exposures such as tobacco smoke can directly alter epigenetic status including DNA methylation levels in enhancer regulatory sequences (Joubert et al, 2012) (Figure 2a) (Reynolds et al, 2015; Su et al, 2016; Wan et al 2018). Determining the functional impact of exposure-induced changes in methylation, such as the effect on transcription, is an active area of interest for our group (Figure 2b). 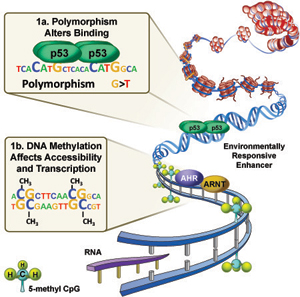 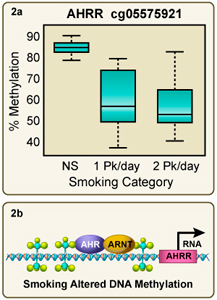 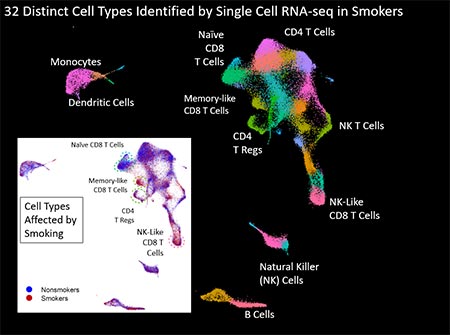 He served as Senior Editor for Biomarkers at Cancer Epidemiology Biomarkers and Prevention and has held a number of editorial board positions, including, Pharmacogenetics and Environmental Health Perspectives and has given over 80 invited lectures in the United States, Europe, Asia and South America. He served as elected chair of the Molecular Epidemiology Group, American Association of Cancer Research and president of the NIEHS faculty (Assembly of Scientists).