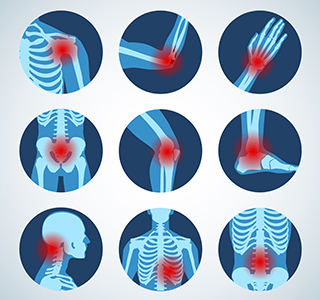 If a cut on your skin swells up, turns red, and hurts, those symptoms are signs of acute, or short-lived, inflammation. Feeling hot or losing function may be signs of inflammation from other harm to your body. Some inflammation that occurs in your body’s cells or tissues may not have outward symptoms.

Inflammation is a normal part of the body’s defense to injury or infection, and, in this way, it is beneficial. But inflammation is damaging when it occurs in healthy tissues or lasts too long. Known as chronic inflammation, it may persist for months or years.

Inflammation may result from many factors, such as:

Inflammation plays a key role in many diseases, some of which are becoming more common and severe. Chronic inflammatory diseases contribute to more than half of deaths worldwide. 1

Inflammation is associated with diseases such as the following:

Increasing evidence suggests environmental factors contribute to chronic inflammation. A review 2 of scientific literature conducted by NIEHS-funded researchers affiliated with the National Toxicology Program found the environment plays a role in inflammation in both positive and negative ways, such as:

NIEHS continues to support a wide variety of research projects focused on inflammation and its role in wellness and disease. Questions NIEHS researchers and grantees are addressing include: