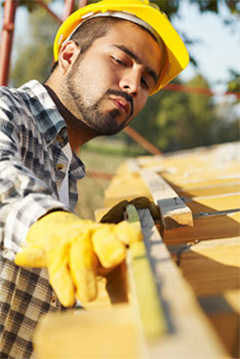 Formaldehyde is a colorless, flammable, strong-smelling chemical widely used to make home building products. Most formaldehyde produced in the United States is for the manufacture of resins, such as urea-formaldehyde, used to make the adhesives for pressed wood products, such as particleboard, furniture, paneling, cabinets, and other products. Formaldehyde is also commonly used as a preservative in medical laboratories, mortuaries, and consumer products, including some hair smoothing and straightening products. It is also a by-product of automobile combustion and is produced in small amounts by most living organisms, including humans.

How are people exposed to formaldehyde?

The general population is exposed to formaldehyde by breathing contaminated indoor or outdoor air and from tobacco smoke. Automobile and other combustion sources, such as woodstoves, incinerators, refineries, forest fires, and fumes released from new construction or home-finishing products, are some of the major sources of airborne formaldehyde. Other consumer goods, including some hair smoothing and straightening products used in salons, cleaning agents, glues, and adhesives, may contain formaldehyde. Formaldehyde levels can be higher in indoor air than in outdoor air.

Since the release of the 12th Report on Carcinogens, several companies that use formaldehyde in their products, have been making efforts to remove or reformulate the chemical so it is less harmful.

Health Effects: Can exposure to formaldehyde cause cancer?

A report by the National Academy of Sciences in 2014 endorsed NTP’s listing of formaldehyde as a known human carcinogen.

Reducing exposure to cancer-causing agents is important to public health and the Report on Carcinogens provides important information on substances that pose a cancer risk. A listing in the RoC does not by itself mean that a substance will cause cancer. Many factors, including the amount and duration of exposure, and an individual’s susceptibility to a substance, impact whether a person will develop cancer or not.

What evidence is there that formaldehyde causes cancer?

The 12th Report on Carcinogens (RoC) based its listing of formaldehyde as a known human carcinogen using the following evidence.

Human Studies: Studies of workers exposed to high levels of formaldehyde, such as industrial workers and embalmers, found that formaldehyde causes myeloid leukemia, and rare cancers including sinonasal and nasopharyngeal cancer.

Mechanistic Studies: The mechanisms by which formaldehyde causes cancer are not completely understood; however, formaldehyde clearly causes genetic damage in the nasal sinus of animals. Less is known about how it causes myeloid leukemia.

In addition to NTP’s work in this area, several NIEHS grantees are working on finding better ways to detect formaldehyde exposure, to develop interventions, and to conduct basic research to determine how formaldehyde can lead to some cancers. See Who We Fund for more information about the work of NIEHS grantees on the topic of formaldehyde.

How can I prevent exposure to this substance?

Use lower-emitting pressed wood products, such as those that are labeled CARB (California Air Resources Board) Phase 1 or Phase 2 compliant, or made with ULEF (ultra-low-emitting formaldehyde) or NAF (no-added formaldehyde) resins. Try to learn as much as you can about the manufacturer’s products visit the store where you bought the product.