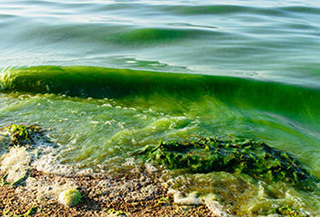 What is a harmful algal bloom?

A harmful algal bloom (HAB) occurs when toxin-producing algae grow excessively in a body of water. Algae are microscopic organisms that live in aquatic environments and use photosynthesis to produce energy from sunlight, just like plants. The excessive algal growth, or algal bloom, becomes visible to the naked eye and can be green, blue-green, red, or brown, depending on the type of algae.

Algae are always present in natural bodies of water like oceans, lakes, and rivers, but only a few types can produce toxins. In these algae, toxin production can be stimulated by environmental factors such as light, temperature, and nutrient levels. Algal toxins are released into the surrounding water or air can seriously harm people, animals, fish, and other parts of the ecosystem.

Why do HABs occur?

Scientists know that environmental conditions trigger HABs, such as warmer water temperatures in the summer and excessive nutrients from fertilizers or sewage waste brought by runoff, but are still learning more about why HABs occur. As climate change gradually warms the earth’s climate, scientists expect HABs to become more frequent, wide-ranging, and severe.

How are people exposed?

During a HAB, people can get exposed to toxins from fish they catch and eat, from swimming in or drinking the water, and from the air they breathe. In recent years, there have been numerous instances of HABs in lakes that provide drinking water, like Lake Erie. Importantly, cooking contaminated seafood or boiling contaminated water does not destroy the toxins.

People rarely get sick from HAB-related toxins in commercial seafood, however, because state regulators closely monitored fisheries for HABs and close them during blooms.

People can prevent exposure to HABs by following local health advisories regarding the safety of recreationally caught seafood and drinking water sources.

What are the health effects of harmful algal blooms?

Depending on the type of algae, HABs can cause serious health effects and even death. For example, eating seafood contaminated by toxins from algae called Alexandrium can lead to paralytic shellfish poisoning, which can cause paralysis and even death. The algae Pseudo-nitzschia produces a toxin called domoic acid that can cause vomiting, diarrhea, confusion, seizures, permanent short term memory loss, or death, when consumed at high levels.

HABs that occur in freshwater, like the Great Lakes and other drinking water sources, are dominated by the cyanobacteria Microcystis. This organism produces a liver toxin that can cause gastrointestinal illness as well as liver damage.

As with many environmental exposures, children and the elderly may be especially sensitive to HAB toxins. Populations that rely heavily on seafood are also at risk of long term health effects from potentially frequent, low level exposures to HAB toxins.

The table below summarizes common HABs and their health effects.

Other impacts from HABs

In addition to health concerns, HABs can damage the environment by depleting oxygen in the water, which can cause fish kills, or simply by blocking sunlight from reaching organisms deeper in the water. The economic impacts of HABs to fisheries and recreational areas can also be extensive. Closed fisheries can lose millions of dollars in revenue each week.

The Environmental Sample Processor can be left in a body of water to continually test for HABs. It was developed with NIEHS support at the Woods Hole Center for Oceans and Human Health. (Illustration by E. Paul Oberlander, Woods Hole Oceanographic Institution)

Since the immediate effects of harmful algal blooms are well known, NIEHS-funded scientists are now investigating potential long term effects of HABs. For example, researchers are studying whether consuming trace amounts of neurotoxic domoic acid over time damages brain function, especially among children or the elderly. In animals, scientists have observed that chronic, low level exposure to domoic acid altered the expression of genes controlling the nervous system and impaired cell function.

Rapid detection of HABs can help state regulators protect public health with minimal economic impacts to fisheries and recreational areas. The Woods Hole Center for Oceans and Human Health (WHCOHH) in Massachusetts designed a robotic system called the Environmental Sample Processor that can be anchored in a body of water to remotely test seawater samples for HABs as they begin to bloom, and send the results to scientists. Other NIEHS-supported researchers are developing instruments that can detect HABs by counting algal cells in water samples or use satellite images to monitor HABs from afar.

Scientists also are studying the ability of water treatment plants to detect HABs and are developing new methods to aid in detection.

With the frequency and severity of HABs increasing worldwide, improved prediction enables public officials to be one step ahead of blooms. NIEHS-funded researchers from the Woods Hole Center for Oceans and Human Health found that in deep waters, the algae Alexandrium fundyense may bloom based on an internal annual clock, while in shallow waters, conditions such as temperature may trigger blooms. These researchers have also shown that the number of dormant cysts formed after a summer Alexandrium fundyense bloom can predict the extent of the next year’s bloom.