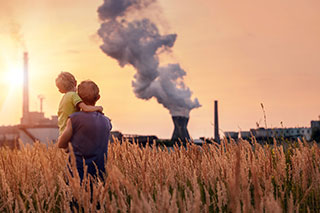 Air pollution is a familiar environmental health hazard. We know what we’re looking at when brown haze settles over a city, exhaust billows across a busy highway, or a plume rises from a smokestack. Some air pollution is not seen, but its pungent smell alerts you.

When the National Ambient Air Quality Standards were established in 1970, air pollution was regarded primarily as a threat to respiratory health. Over the next decades as air pollution research advanced, public health concern broadened to include cardiovascular disease; diabetes mellitus; obesity; and reproductive, neurological, and immune system disorders.

Air pollution exposure is associated with oxidative stress and inflammation in human cells, which may lay a foundation for chronic diseases and cancer. In 2013, the International Agency for Research on Cancer of the World Health Organization (WHO) classified air pollution as a human carcinogen.

What Is Air Pollution?

Air pollution is a mix of hazardous substances from both human-made and natural sources.

Nature releases hazardous substances into the air, such as smoke from wildfires, which are often caused by people; ash and gases from volcanic eruptions; and gases, like methane, which are emitted from decomposing organic matter in soils.

Ozone, an atmospheric gas, is often called smog when at ground level. It is created when pollutants emitted by cars, power plants, industrial boilers, refineries, and other sources chemically react in the presence of sunlight.

Particulate matter (PM) is composed of chemicals such as sulfates, nitrates, carbon, or mineral dusts. Vehicle and industrial emissions from fossil fuel combustion, cigarette smoke, and burning organic matter, such as wildfires, all contain PM.

A subset of PM, fine particulate matter (PM 2.5) is 30 times thinner than a human hair. It can be inhaled deeply into lung tissue and contribute to serious health problems. PM 2.5 accounts for most health effects due to air pollution in the U.S.

Volatile organic compounds (VOC) vaporize at or near room temperature—hence, the designation volatile. They are called organic because they contain carbon. VOCs are given off by paints, cleaning supplies, pesticides, some furnishings, and even craft materials like glue. Gasoline and natural gas are major sources of VOCs, which are released during combustion.

Polycyclic aromatic hydrocarbons (PAH) are organic compounds containing carbon and hydrogen. Of more than 100 PAHs known to be widespread in the environment, 15 are listed in the Report on Carcinogens. In addition to combustion, many industrial processes, such as iron, steel, and rubber product manufacturing, as well as power generation, also produce PAHs as a by-product. PAHs are also found in particulate matter.

Over its 50-plus year history, NIEHS has been a leader in air pollution research. In 1993, NIEHS researchers published the landmark Six Cities Study, which established an association between fine particulate matter and mortality. The institute continues to fund and conduct research into how air pollution affects health and the population groups who are most affected.

How does air pollution affect our health?

Whom does air pollution affect the most?

Air pollution affects everyone’s health, but certain groups may be harmed more.
Almost 9 out of 10 people who live in urban areas worldwide are affected by air pollution.

The NIEHS-funded Children’s Health Study at the University of Southern California is one of the largest studies of the long-term effects of air pollution on children’s respiratory health. Among its findings:

Other studies on women and children

Your genes play a role in respiratory health. NIEHS-funded research discovered that people with specific gene variants, which made them more likely to have lung inflammation, had a greater chance of suffering from asthma if they lived close to major roadways.

NIEHS also helps residents of Imperial County, California track air pollution through a network of 40 community-run monitors. In this county, long-term improvements in air quality were associated with significant lung-function improvement in children.

The goal of the Natural History of Asthma with Longitudinal Environmental Sampling (NHALES) study is to help scientists understand how bacteria and other factors in the environment affect people who have moderate to severe asthma.