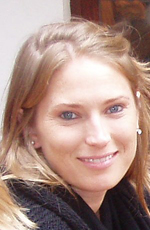 The Superfund Research Program (SRP) is pleased to announce that Elena Craft, Ph.D., was the recipient of the Fifth Annual Karen Wetterhahn Memorial Award. The award was presented to Dr. Craft on November 5, 2002 at the SRP Annual Meeting in Tucson, Arizona.

Craft received the Karen E. Wetterhahn award during the third year of her Ph.D. training at the Nicholas School of the Environment at Duke University, where she participated in the integrated toxicology program with a focus on metal toxicity. She earned the award based on her research excellence in the characterization of metal responsive signal transduction pathways and the determination of the precise mechanism by which metals activate metal-responsive transcriptions factors. The model she helped develop will have direct applicability in determining mechanisms by which metals induce intracellular toxicity, disrupt normal development, and induce cancer.

Today, Craft is Associate Vice President of Climate and Health at the Environmental Defense Fund.

Craft completed her Ph. D. training in the summer of 2006 while conducting research at the NIEHS Laboratory of Molecular Toxicology. Her other research experience relates to PCBs and dioxin, and their effects on thyroid hormones, as related to low frequency hearing loss. Through this research and her project at Duke, Craft gained experience with behavioral studies, animal work, cell culture, and protein expression, in addition to molecular biology and toxicological tools.

Craft continued to participate in SRP sponsored activities following graduation, and in 2006 helped write an opinion article with other SRP staff and trainees, "Prioritizing Environmental Issues around the World: Opinions from an International Central and Eastern European Environmental Health Conference," published in Environmental Health Perspectives.

"Over the years, the Superfund Basic Research Program has had a dramatic influence on my scientific career, I have been privileged to meet, work, and train with the highest caliber scientists in my field, as well as to participate in organizing and presenting at a variety of both national and international meetings that have been either sponsored or supported by the program. The SBRP remains steadfast in its enhancement and promotion [of] my professional career through the continued mentorship and support provided by its capable and dedicated staff."

Craft now works for Environmental Defense Fund (EDF) as a Health Scientist in Austin, Texas. EDF is a leading, national non-profit that links science, economics, law, and private sector partnerships to strategize solutions for environmental problems. Craft's role and responsibilities focus on reducing pollutant emissions, including greenhouse gases and criteria air pollutants, around port areas and environmental justice communities, with the ultimate goal of improving human health. She has been an integral strategist in designing and initiating comprehensive clean air measures within the transportation sector, and has assisted in development of performance standards for trucks and ships, with an overall goal to reduce emissions from all goods movement operations. With help from strategic partners, such as WalMart and Target, Craft has helped create clean truck programs in Houston and other ports around the country. Realization of this market-based approach to modernize port trucks is estimated to result in an average emission reduction of approximately 15% of total port emissions. She is also involved in innovative projects to increase efficiency from shipping operations on an international scale, including hydrogen fuel cell technology.

The NIEHS congratulates Craft on her research accomplishments and wishes her continued success in her scientific career.