Diseases, like cancer or cardiovascular disease, are often identified later in life. However, these health problems are suspected to originate much earlier, including during prenatal development and early childhood. Heather Stapleton, Ph.D., of the Duke University SRP Center, and Seth Kullman, Ph.D., of the Duke University and North Carolina State University SRP Centers, collaborate on a project exploring how exposure to flame retardants and mixtures of chemicals early in life alter development and health in adulthood. They have characterized how brominated and organophosphate flame retardants in indoor dust increase fat accumulation  in mouse cells. These findings were confirmed in human studies, where higher serum levels of chemicals in flame retardants were associated with increased formation of fat cells and fat accumulation, and higher body mass index. Using fish models , their work has shown how exposure to these hazardous compounds flips a switch in cells early in development to favor the development of fat cells over bone cells. These changes early in life may contribute to degenerative bone diseases in adulthood.

Researchers at the Boston University SRP Center, led by Ann Aschengrau, Ph.D., have linked early-life exposure to tetrachloroethylene (PCE) in drinking water with increased risk of epilepsy and cancer , visual dysfunction, and mental illness later in life. They found that risky behaviors, particularly drug use, were more frequent among adults who were exposed to higher levels of PCE in the womb and in early childhood. The team also uncovered that prenatal exposure to both alcohol and PCE may combine to increase the risk of using multiple illicit drugs as a teenager.

Scientists at the University of Rhode Island SRP Center studied a cohort located on the Faroe Islands to reveal links between early-life PFAS exposure and immune dysfunction and metabolic abnormalities. Led by Philippe Grandjean, D.M.Sc., M.D., the team is identifying pathways by which exposure to PFAS contributes to obesity and weakened immune systems. For example, they recently found evidence that PFAS disrupts metabolism by disrupting the regulation of hormones that help control energy storage and body composition. 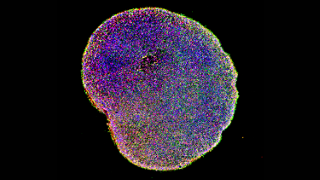 Led by Quan Lu, Ph.D., researchers at the Harvard University SRP Center are studying how exposure to lead, arsenic, manganese, and cadmium alone or in mixtures during development alters signaling molecules  in the brain to accelerate cognitive aging, which may lead to cognitive decline. They are studying early-life metal exposures in mice and brain organoids, which are 3-D cell models that have the same collection of cell types and basic connections as a human brain. Other scientists at the Harvard SRP Center, led by Marc Weisskopf, Ph.D., Sc.D., are studying the relationship between prenatal and early postnatal exposure to metals and cognitive function and decline in older human populations. Their unique approach will estimate metal exposure early in life using baby teeth collected in the 1950s and 1960s and connect that to the cognitive health of individuals who are now adults. In particular, they are interested in the role of epigenetic changes, which control whether genes are turned on or off without altering the DNA itself, as an underlying mechanism.

Researchers at the Baylor College of Medicine SRP Center, led by Center Director Bhagavatula Moorthy, Ph.D., are exploring the mechanisms by which early exposure to PAHs can harm the lungs leading to chronic lung disease in mice. They are particularly interested in how premature infants, who may require early life medical treatments with supplemental oxygen, may be more susceptible to lung injury and disease if their mothers were exposed to PAHs during pregnancy.

Arsenic as a Case Study

Transdisciplinary teams of SRP researchers have made important contributions to understanding how exposure to arsenic may harm health throughout the lifespan.

Rebecca Fry, Ph.D., of the University of North Carolina SRP Center studies the mechanisms by which exposure to arsenic early in development affects health throughout life. Fry’s work has added to increasing evidence that these later life health effects may be tied to changes in the epigenome, those that alter the expression of DNA without changing DNA directly. Her work has shown how arsenic exposure can result in epigenetic changes that can disrupt the endocrine system and can help explain differences in birth outcomes among children.

Researchers at the University of California, Berkeley SRP Center, led by Craig Steinmaus, M.D., are studying the effects of early-life exposure to arsenic in a group of people in northern Chile who were exposed to high levels of arsenic in drinking water early in life before a water treatment plant was installed. Even 25 years after a major decrease in arsenic exposure, they reported that population mortality rates  remained elevated. They found an association between prenatal and childhood arsenic exposure and signs and symptoms of lung disease in adults, such as decreases in lung capacity and increases in chronic cough and bronchitis. The researchers also uncovered an association between early life arsenic exposure and type 2 diabetes and hypertension in adults. Early-life arsenic exposure was also associated with cancer in specific kidney and ureter cells as well as lung and bladder cancer.

The University of Arizona SRP Center team examined the relationship between arsenic exposure and health outcomes in mice. For example, they found that early life exposure to arsenic permanently alteredairway structure and function   in mice. They also found that prenatal and early-life exposure to arsenic disrupted normal metabolism and elevated the risk for fatty liver disease  in mice maintained on a high-fat diet. According to the researchers, individuals exposed to arsenic during key developmental periods while on a Western-style diet may be at increased risk for metabolic disease later in life. For the last 20 years, researchers with the Columbia University SRP Center have been following an arsenic-exposed population in Bangladesh through the Health Effects of Arsenic Longitudinal Study (HEALS) and ancillary studies. Their work has been instrumental in linking long term and early-life arsenic exposure with numerous diseases across the life course. For example, they have demonstrated a link between higher arsenic exposure and chronic disease mortality , including from cardiovascular disease . They found that arsenic exposure increased the risk of heart disease , and shed light on the underlying mechanism  by which arsenic can harm heart health. They also revealed that exposure to arsenic in early life can lead to increased blood pressure  in adolescence. The researchers have made important discoveries linking early life exposure to arsenic with decreased intellectual function  and motor function  in adolescence. These findings were mirrored in a population in the U.S. where higher arsenic exposure was associated with lower IQ. 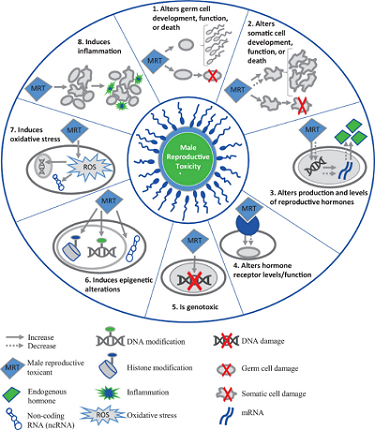 Researchers at the Boston University SRP Center, led by Stefano Monti, Ph.D., explore experimental and computational approaches to model environmental chemicals and to predict their long-term adverse effects from short-term experiments. For example, through the Carcinogenome Project , they developed a framework to predict long term cancer risk from exposure to chemicals. The fast, cost-effective method uses gene expression profiling, which measures the activity of a thousand or more genes to capture what is happening in a cell, and computer modeling to predict the ability of the chemicals to cause cancer. 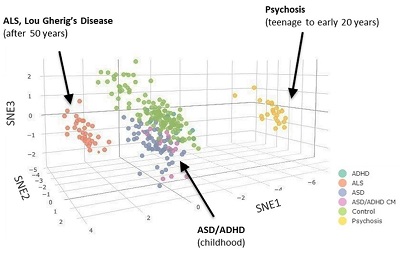 Manish Arora, Ph.D., a former Harvard University SRP Center trainee and leader of the Human Health Exposure Analysis Resource (HHEAR) laboratory  at the Icahn School of Medicine at Mount Sinai, studies environmental biodynamics, which focuses on the interplay between the environment and the body. Using teeth to characterize exposure to a variety of chemicals from the prenatal period through childhood, his research helps to link exposures during critical windows with latent diseases. For example, his research showed that essential and toxic elements are regulated differently  in children with autism spectrum disorder, revealing a potential sensitive biomarker for early diagnosis. These techniques are now being applied to study and predict neurodegenerative diseases that occur later in life, including amyotrophic lateral sclerosis  and Parkinson’s disease.

Led by Robyn Tanguay, Ph.D., researchers at the Oregon State University SRP Center develop comprehensive models to predict the toxicity of complex polycyclic aromatic hydrocarbon (PAH) mixtures. Using zebrafish, they screen PAH mixtures for toxicity based on their chemical structure and activity within the body, including changes at the molecular, organ, and organism levels. They are particularly interested in predicting how early life exposures affect long term brain development and behavior. For example, they found that zebrafish exposed to PAHs as embryos had impaired behavior as larvae and decreased learning and memory function as adults.

Theodore Slotkin, Ph.D., and colleagues at the Duke University SRP Center explore how exposure to PAHs and pesticides early in life affect brain and metabolic outcomes later. Their early work identified critical windows of neurodevelopment that were sensitive to harmful exposures and revealed important differences between exposure to individual PAH chemicals compared to realistic mixtures. They also reported that rats exposed to pesticides shortly after birth had altered metabolism  that may contribute to obesity and other metabolic outcomes in adulthood. More recent studies focus on identifying the underlying mechanisms, such as epigenetic changes  and neurotransmitter disruptions , by which early life exposures lead to disease and developing high-throughput approaches for evaluating them.

SRP funded two HHEAR labs  to provide state-of-the-art services for analyzing biological and environmental samples associated with human health. The HHEAR lab at the Icahn School of Medicine at Mount Sinai  provides untargeted analysis of biological samples, like blood, urine, stool, saliva, teeth, and hair to help link exposures and health outcomes. The HHEAR lab at Duke University  provides untargeted and targeted analyses to comprehensively measure chemicals in air samplers, silicone wristbands, and environmental media, including water, soil, sediment, and dust, collected from a human health study with the goal of linking health outcomes to their environmental sources. Together, these approaches can give a more comprehensive picture of what people are exposed to throughout their lives and help strengthen the evidence linking exposures and disease.