The team, led by Milton Gordon, Ph.D., and Lee Newman, Ph.D., found that hybrid poplar trees can degrade chlorinated organic solvents in groundwater, including trichloroethylene (TCE), perchloroethylene, and carbon tetrachloride. They were the first to genetically enhance poplar trees to increase removal of TCE, and their approach evolved to become more efficient, sustainable, and cost-effective. 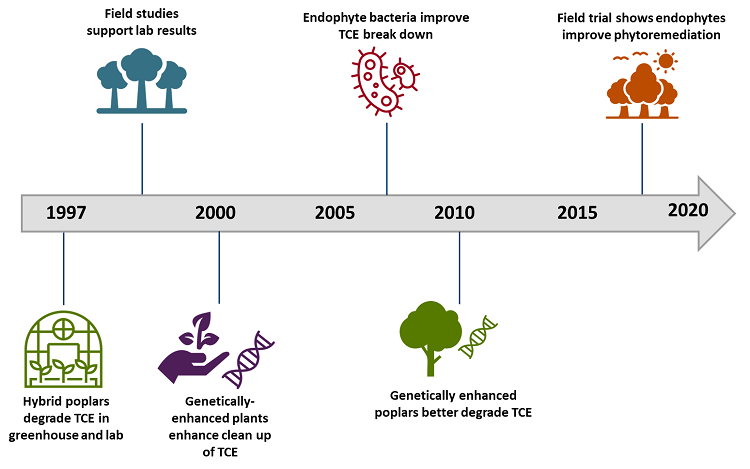 Chlorinated organic solvents are widespread toxic pollutants that tend to rapidly move through the soil and into groundwater. Traditional approaches to clean up these compounds, such as pump and treat, are expensive and time consuming, and may form by-products that are also harmful to human health.

Cleaning Up Toxins with Plants

Poplar trees grow quickly, and their root systems penetrate large volumes of soil from which they draw water to extract nutrients. They also take up organic contaminants during this process, which are metabolized and broken down into harmless products. Phytoremediation is driven by solar power and does not involve the use of other chemicals to degrade pollutants. It also does not require contaminated water or soil to be removed from the site to be cleaned up, making it cost-effective.

For examples of high-impact SRP research on bioremediation, including phytoremediation, see the list of related SRP Research Briefs.

Gordan and Newman, with early collaborators Stuart Strand, Ph.D., and Paul Heilman, Ph.D., brought together interdisciplinary expertise in physiology, agronomy, microbiology, hydrogeology, and engineering. They developed remediation technologies using hybrid poplar trees that clean up contaminants in the environment. This cost-effective strategy reduces the amount and toxicity of pollutants while preserving or restoring the environment and habitats. Their findings also spawned a new field of research.

From the 1980's until 2015, the NIEHS SRP funded cutting-edge phytoremediation research at the UW SRP Center. Initiated by Gordon, this work evolved from identifying plant species best suited to remediation, to understanding the mechanism of detoxification, to genetically enhancing poplars to better metabolize these contaminants. 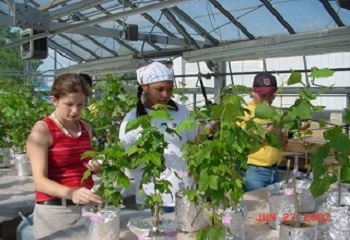 Since then, Newman, Strand, and former UW SRP Center postdoctoral trainee Sharon Doty, Ph.D., pushed the field of phytoremediation forward through their innovative use of hybrid poplar trees to clean up contaminants. Experiments using the trees moved from the lab to field studies, and they have also been used to clean up hazardous waste sites.

From the Lab to the Field

Gordon and Newman's research was the first to show conclusively that plants themselves, not just microorganisms associated with plants, are capable of degrading toxic compounds.

They demonstrated that hybrid poplars could take up and degrade TCE in greenhouse and lab studies, showing that less than 5% of the TCE removed from the environment was transpired by the plants. Later, they expanded this work to the field, showing that the trees removed more than 99% of TCE present in groundwater. The group achieved similar results for carbon tetrachloride, with 99% removal and limited transpiration under field conditions.

The phytoremediation system was installed as part of a clean-up plan for a Superfund site in Keyport, Washington, to treat TCE-contaminated groundwater leaching from a wetland. The team continued to study the Keyport site for several years to improve their understanding of how hybrid poplars take up and metabolize contaminants.

UW SRP Center researchers explored the mechanism by which cells of poplar trees detoxify carbon tetrachloride and TCE. SRP trainees in Newman’s lab focused on identifying plant genes involved in TCE degradation while Stuart and Doty focused on using mammalian P450, a key enzyme in the metabolism of a variety of compounds, to genetically enhance plants to better degrade TCE. 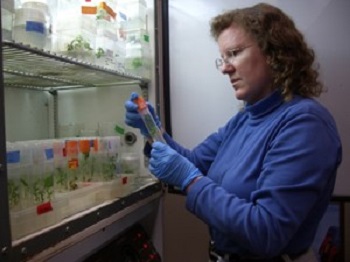 In a related area of research not funded by SRP, colleagues at Brookhaven National Laboratory identified a species of endophyte bacteria only present in plants exposed to TCE. Endophytes are symbiotic microorganisms that exist within plant tissues without harming and potentially benefiting the plants. Newman’s research with this bacteria showed that they dramatically enhanced plant root development and TCE degradation in the poplars.

With funding from the National Science Foundation, Doty identified a species of endophyte bacteria that naturally colonizes poplars with high rates of TCE degradation. Building on this work, her team also isolated endophytes that degrade polycyclic aromatic hydrocarbons, which they successfully demonstrated in a pilot study on a Superfund site with outside funding.

Researchers led by SRP-funded small business Edenspace Systems Corporation conducted the first large-scale experiment on a Superfund site using poplar trees fortified with the microbial endophyte identified by Doty to clean up TCE-contaminated groundwater. Their work showed that endophyte assistance boosts the speed and effectiveness of this natural degradation process while also protecting the plants from harmful effects of TCE. With the added help of endophytes, the technology is a more cost-effective and sustainable method for removing contaminants from the environment.

Collaborating with Another SRP Center

In the 1990’s Gordan and Newman met and collaborated with Jerald Schnoor, Ph.D., at the University of Iowa. Interested in a similar line of research, Schnoor, Gordan, and Newman strategized how to use phytoremediation with hybrid poplars for different groups of contaminants. In fact, one of Schnoor’s students teamed up with the UW SRP team to identify and characterize endophyte bacteria on poplar trees in a project supported through the university. When the University of Iowa SRP Center was funded in 2006, Schnoor led a project studying the ability of hybrid poplar trees to degrade polychlorinated biphenyls (PCBs).

The Naval Undersea Warfare Center Division estimated estimated that their use of the UW SRP Center phytoremediation method saved up to $10.5 million compared with traditional methods at the Keyport site. Based on these promising results, the U.S. EPA used hybrid poplar trees at the Argonne National Laboratory in Batavia, Illinois and estimated approximately $2.4 million in cost savings. technology was validated as part of the U.S. Department of Defense’s Environmental Security Technology Certification Program, which estimated that as many as 1,000 cleanup sites worldwide could use the technology, saving hundreds of millions of dollars.