Richard Woychik, Ph.D., is Director of NIEHS & NTP and head of the Mammalian Genome Group. The group is broadly interested in understanding the role of epigenomic transcriptional regulation in an organism’s response to environmental exposures. It is specifically interested in studying the role of repetitive elements (REs) in these processes.

All mammalian genomes are comprised of a large assortment of different classes repetitive elements (REs) that include LINE’s, intracisternal A particles (IAPs), VL30 elements, endogenous retroviral elements (ERVs), SINEs, transposons, and various other types of repetitive elements. These REs are distributed across the entire genome and are highly abundant. In fact, it has been estimated that REs comprise more than 50 percent of a typical mammalian genome. Many of these elements have powerful regulatory elements and exhibit complex patterns of transcriptional expression throughout mammalian development.

Transcription of repetitive elements has been shown to influence the expression of adjacent genes. Since there are nearly 5 million RE loci across the mammalian genome, the group is currently working to determine how many genes have patterns of expression that are influenced by adjacent REs. The group is also examining the role of mitochondrial metabolism in the epigenetic regulation of genes, including REs, within the nuclear genome. 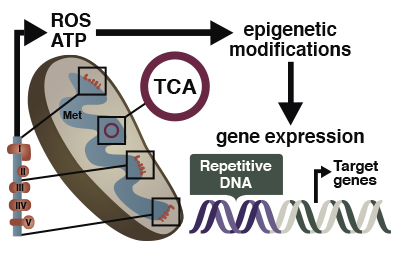 Woychik completed his B.S. and M.S. at the University of Wisconsin, Madison, and earned his Ph.D. in molecular biology at Case Western Reserve University in 1984. He received his postdoctoral training in the laboratory of Philip Leder, M.D., at Harvard Medical School with fellowship support from the Jane Coffin Childs Memorial Fund and from the Howard Hughes Medical Institute.