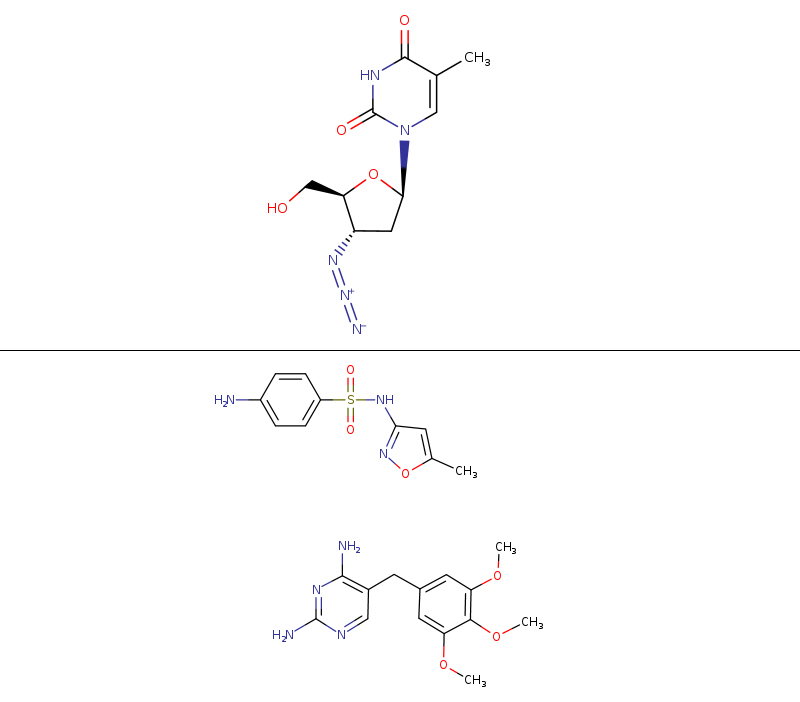 The toxicity of combinations of AZT (200 or 400 mg/kg), TMP/SMX (1,000, 2,000, or 3,000 mg/kg), and folinic acid (10 mg/kg) was evaluated in Swiss (CD-1®) mice treated by oral gavage. The doses of AZT are equivalent to two and four times the therapeutic dose in humans (based on body surface area); doses of TMP/SMX are one, two, and three times the therapeutic dose for toxoplasmosis in mice. The dose of folinic acid is 100 times the nutritional requirement in mice. Male mice (10 per group) were dosed from day 5 until the day prior to sacrifice on day 25 or 26. Females were divided into two groups designated female-A mice and female-B mice. The female-A mice (20 per group) were dosed from day 0 to sacrifice. They were cohabited with treated males on days 9 to 13 to test for effects on mating behavior, fertilization, and implantation, and caesarean sections were performed on days 28 to 32. The females designated as female-B mice (20 per group) were cohabited with untreated males on days 0 to 4. Sperm-positive female-B mice were dosed during organogenesis on days 6 to 15 of presumed gestation and sacrificed on day 4 of lactation.

Summarized in Table 1 are the significant effects of treatment with AZT, TMP/SMX, and/or folinic acid. The most significant effect of AZT alone in adult mice was a mild dose-related anemia in males and females. Combination therapy with AZT and TMP/SMX resulted in hematopoietic toxicity of far greater severity than that following treatment with either test compound alone. Male and female-A mice that received combination therapy developed severe anemia, reticulocytopenia, and thrombocytosis accompanied by cellular depletion of bone marrow and diminished splenic hematopoiesis. Mortality occurred in female-A mice that were treated with AZT and TMP/SMX combinations. Female-B mice that received combination therapy had a mild regenerative anemia with reticulocytosis. Female-A and female-B mice that received AZT and TMP/SMX with or without folinic acid showed marked declines in mean body weight. In general, other manifestations of toxicity included pallor, piloerection, labored breathing, diminished motor activity, and emaciation. Thyroid gland hyperplasia was observed in all groups treated with TMP/SMX alone or in combination with AZT. Combination therapy as well as therapy with TMP /SMX alone also resulted in hepatocyte hypertrophy.

The most striking effect on reproductive and developmental parameters was the presence of cleft palate in 100% of the litters of female-B mice treated with greater than 2,000 mg TMP/SMX per kg body weight either alone or in combination with AZT. In female-A and female-B mice, AZT alone produced decreases in uterine weights, live litter sizes, pup weights, and fetal weights and increased pup deaths and resorptions. TMP/SMX produced mortality in female-A and female-B litters; reduced the number of litters, litter size, and pup weight; and increased the number of pups dying on days 1 to 4. In males, TMP/SMX decreased testicular weight, spermatid heads per testis, and average spermatid count; treatment with either AZT or TMP/SMX reduced sperm motility.

With the exception of thyroid gland hyperplasia and the development of cleft palates, the combination of AZT and TMP/SMX resulted in toxicity of greater severity than that subsequent to the administration of either compound alone. Supplementation with folinic acid failed to significantly ameliorate any toxic effect of AZT and/or TMP/SMX.