Can science can tell us why we create music and how the art form might improve our health? Those questions — and live jazz improvisation — entertained a packed crowd at Music and Science. The lunchtime event was hosted by NIEHS and the Research Triangle Foundation (RTF), Feb. 18.

Headlining the event were bassist John Brown, director of Duke University’s jazz program and professor of the practice of music, and Richard Mooney, Ph.D., professor of neurobiology at Duke. 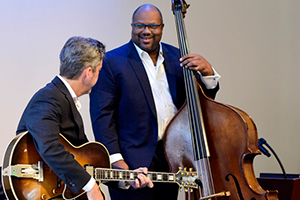 Mooney’s lab studies the neurobiology of hearing and communication, with special emphasis on the neural mechanisms of vocal learning, production, and perception.

After brief introductions by Linda Rozet, a senior director at RTF who helped coordinate the event, and NIEHS Acting Director Rick Woychik, Ph.D., the program began with a jazz set by Brown and guitar accompanist Kevin Van Sant. Although the discussion that followed touched mostly on music’s mysteries and appeal, there was some hard science.

Mooney, a classically-trained guitarist, described the connectivity of the brain and the ear as a closed loop — known as a recurrent network. The inner ear’s cochlea does more than just deliver sound. The brain, cochlea, and internal chemistry work together to influence how we hear, from assisting active listening to amplifying sound. 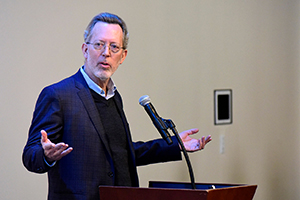 “It was my love of music that led me to neurobiology,” said Mooney.
(Photo courtesy of Steve McCaw)

Musicality in speech is essential to communication. “There are people who have lesions in the right frontal cortex who lose a kind of musicality, making their speech very hard to understand,” said Mooney. “Without emotional inflection and content, speech becomes almost incomprehensible.”

Running to the beat

Woychik asked about how the brain helps us exercise better when we listen to music synchronized to our activity.

“This issue of synchronization is really key to how music affects us. But I suspect the reason is entrainment,” said Mooney. “Still, chemistry is involved.” Entrainment is the biological phenomenon in which humans react in time to rhythm, whether through music, dance, or even exercise. 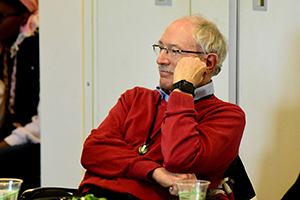 Woychik listened to the answer to his question about brain chemistry.
(Photo courtesy of Steve McCaw)

Discussing improvisation, Brown and Van Sant both, in different ways, described it as an intuitive process that requires musicians to listen intently and be sensitive to minor changes in tempo and mood.

Event planners were excited about the turnout and enthusiasm. “It seemed like a good format — we sold out in 24 hours,” said Laura Thomas, Ph.D., a scientific review officer in the NIEHS Division of Extramural Research and Training who helped plan the event. “And we were really stunned by the great chemistry in the room.”

Brandy Beverly, Ph.D., a health scientist in the National Toxicology Program, and John Schelp, from the NIEHS Office of Science Education and Diversity (OSED) also helped with planning. 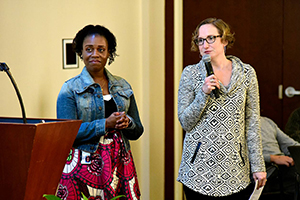 “The reality is we don’t know the science behind how music influences health, so we’re trying to start having those conversations,” said Thomas, right, shown here with Beverly.
(Photo courtesy of Steve McCaw)

“I thought today was absolutely fantastic,” added Rozet. “It helped me reach one of my goals, which is to raise awareness of the role the arts play in innovation and science.”

“People often say there’s a connection between music and science that we don’t really understand,” said Brown. “Well, this is as tangible as it gets, breaking down how our brains respond to music, trying to put a finger on this connection.”

The lunch-and-learn format represented a change from Music and Your Health, NIEHS’s all-day event in 2018.

“We’re thinking of making this into a twice-a-year music and health lunch series,” said Ericka Reid, Ph.D., director of the NIEHS Office of Science Education and Diversity, which also assisted in the event planning.

(John Yewell is a contract writer for the NIEHS Office of Communications and Public Liaison.)