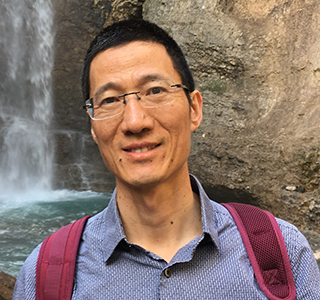 Wang is also an associate editor for the journal Chemical Research in Toxicology. (Photo courtesy of Yinsheng Wang)

Wang left the Chinese countryside, where he grew up, to attend college at Shandong University in the eastern metropolis of Jinan. After graduation, he pursued a master’s degree at the Dalian Institute of Chemical Physics, part of the Chinese Academy of Sciences, in northeastern China.

His Ph.D. work took him across the globe to Washington University in St. Louis, Missouri. There, Wang began studying DNA damage — a topic that he pursues today as a chemistry professor at the University of California (UC), Riverside.

“Our lab’s strength is that we work at the interface of chemistry and biology,” he explained. “We use a combination of advanced chemical tools to address important biological questions, such as how exposure to toxic chemicals can alter our DNA and cause disease.”

In 2020, Wang received a grant from a prestigious NIEHS program called RIVER, for Revolutionizing Innovative, Visionary Environmental health Research. The unique eight-year award recognizes outstanding researchers in their field, providing them with flexibility and substantial funding to pursue their independent research programs.

“It was thrilling to win,” Wang said. “I felt honored to be recognized by my peers. But importantly, this grant provides me with sustained support to focus on science. I can pursue intellectually stimulating projects that may take longer to complete.”

One avenue of Wang’s research explores how DNA and RNA — a critical component of protein synthesis — are affected by environmental exposure to alkylating agents, compounds that easily bind to certain sections of molecules, thereby altering their structure and function.

“Many cancer-fighting drugs are alkylating agents that act by destroying DNA,” Wang said. “Alkylating agents can also be found in cigarette smoke and in byproducts of disinfection processes used in water treatment, among other places.”

Our own bodies also naturally produce these compounds, as in the case of methylation, a vital process that regulates gene expression.

“Environmental exposures to alkylating agents can potentially lead to errors in DNA replication and transcription — the process by which RNA is made from a DNA template — as well as irregular gene expression,” Wang said.

Wang and his team want to better understand on a molecular level how alkylating agents damage DNA and RNA, and how the body recognizes and repairs those areas. One goal of their research is to inform new cancer therapies.

“By learning how DNA damage from alkylating agents is repaired, we could inform the development of drugs that selectively suppress that process in cancer cells,” Wang said. “A class of anticancer drugs used to treat breast and ovarian cancers is one recent example of this kind of targeted therapy.”

A New Take on Huntington’s Disease

Wang is also exploring the molecular underpinnings of debilitating neurological diseases like Huntington’s, which kills nerve cells in the brain. Such disorders can arise when short, repetitive sequences of DNA within a given gene appear in greater numbers than usual. That repetition is preserved in RNA, which guides the formation of proteins that have an abnormal tendency to form toxic clumps, according to Wang.

“Past research has focused on the specific proteins,” he said. “But we think that RNA modification — in the form of methylation — may play an important role in diseases like Huntington’s.”

In a study not yet unpublished, Wang and colleagues found that the frequency of RNA methylation increases with the length of the repetitive sequence in RNA. According to Wang, those modifications can trigger protein clumping.

“Clarifying this mechanism may provide a new target for therapies to treat disease,” he said.

The Right Tool for the Job

A crucial component of Wang’s work is mass spectrometry, a technique for analyzing molecules based on their mass and charge. 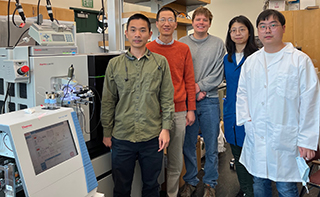 Wang (second from left) and colleagues pose next to his lab’s new mass spectrometer. (Photo courtesy of UC Riverside)

“Mass spectrometry offers an unparalleled combination of specificity and sensitivity for characterizing and measuring biological molecules,” he said.

Wang cited a 2012 study, supported in part by NIEHS, as an early example of the technique’s importance to his research. In that paper, his team described a pioneering method for examining how damage to DNA can affect transcription.

“Mass spectrometry is an integral part of this method, because it can identify mutated, or altered, RNA transcripts arising from DNA damage,” he said.

More recently, Wang and colleagues used the approach to identify a new role for a protein important in DNA transcription. They found that the protein can attach to an unusual DNA structure called a quadruplex and enable looping, whereby portions of DNA some distance from each other interact; the section between billows like the bow in a shoelace.

“DNA looping is another way that gene expression is regulated,” Wang said. “Now we know that this well-studied protein is also involved in that important process through its recognition of quadruplex DNA.”

Colleagues have lauded Wang’s scientific contributions through various honors. In 2012, the American Chemical Society’s Division of Chemical Toxicology and its journal Chemical Research in Toxicology co-presented him with an inaugural Young Investigator Award.

The next year, Wang received the Biemann Medal from the American Society for Mass Spectrometry, which recognizes middle-career scientists who made substantial contributions to mass spectrometry instrumentation or application.

The Eastern Analytical Symposium also selected him for an Award for Outstanding Achievements in Mass Spectrometry in 2018.

“Dr. Wang has provided outstanding service to the environmental health sciences community,” said Fred Tyson, Scientific Program Director of the Cellular, Organ, and Systems Pathobiology Branch of the NIEHS Division of Extramural Research and Training. “Not only does he consistently produce high-impact results using cutting-edge approaches to studying the effects of alkylating agents on DNA and RNA, but he is also training the next generation of environmental health scientists.”

Indeed, over the years, Wang has shared his expertise as a mentor to dozens of graduate students. At last count, he has congratulated exactly 40 students on receiving their Ph.D.s.

“It’s always gratifying to see students grow,” he said. “When they first come to the lab, they don’t know too much. But you see them improve in writing, oral presentation, and in understanding science. By the time they graduate, they have become independent scientists in many ways.”