Exploring the Role of the Biological Clock in Gene-environment Interactions

With funding from the NIEHS ONES Program, Shobhan Gaddameedhi, Ph.D., is exploring how our circadian clock helps protect against genomic instability and environmental carcinogenesis. 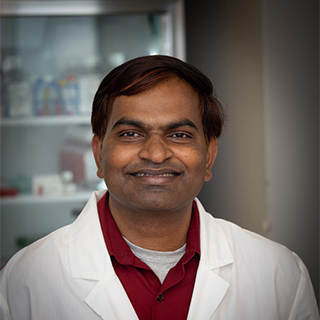 Gaddameedhi is an associate professor in the Department of Biological Sciences and Toxicology Program at North Carolina State University. (Photo courtesy of Shobhan Gaddameedhi)

Shobhan Gaddameedhi, Ph.D., has long held a deep respect for the environment. As a child growing up in a small farming village in India, he learned from his parents to appreciate the importance of a healthy environment for promoting human health.

As the first in his family to seek higher education, Gaddameedhi was inspired by many mentors, including his high school biology teacher. After completing his doctorate, he went on to work under Aziz Sancar, M.D., Ph.D., winner of the 2015 Nobel prize in chemistry for his groundbreaking research on DNA repair, at the University of North Carolina at Chapel Hill.

“My postdoctoral fellowship in Sancar’s lab was transformative for my research career,” Gaddameedhi recalled. “Some of the seminal research we published on DNA repair and circadian rhythms set me on the path I’m on today.” Circadian rhythms refer to processes that occur in a 24-hour cycle like sleeping and waking.

Today, Gaddameedhi leads a research team team at North Carolina State University studying the role of circadian rhythms in how our genes respond to stresses from the environment.

Circadian Rhythms and Our Internal Clocks

Gaddameedhi explained how the brain contains a bundle of nerve cells that functions as an internal master clock. The master clock is set by cycles of light and dark and is in tune with the daily rotation of the earth. Precisely timed expression of different proteins maintains the circadian rhythm in the master clock.

Through hormones and neural signals, the master clock communicates with most other cells in the body, each with its own peripheral clocks, to synchronize various biological processes known collectively as circadian rhythms. Peripheral clocks can also be set by behaviors such as eating and fasting or sleeping and waking.

“We experience circadian rhythms every second, 365 days per year throughout our life,” Gaddameedhi said. “Every cell in our body is programmed with a biological clock that aligns with the day and night cycles and controls numerous biological processes on a 24-hour cyclical rhythm of day and rest.”

Disturbances such as excessive light at night, jet lag, staying up late on weekends, or rotating night shift work can disrupt circadian rhythms, he explained.

“As many as 19 million workers in the United States perform shift work that potentially causes circadian disruption,” Gaddameedhi said. “There is also a strong correlation between circadian clock disruption and diseases, including metabolic disorders and certain types of cancers.”

As an assistant professor at Washington State University from 2014 to 2020, Gaddameedhi and collaborators examined the effect of sleep patterns common in night shift workers on levels of certain digestive metabolites known to cycle with circadian rhythms. They found that levels of these metabolites, controlled by peripheral clocks in the liver, pancreas, and digestive tract, were moved by 12 hours following a night shift sleep pattern. The master clock, however, was not disrupted.

According to Gaddameedhi, night shift workers likely experience misalignment between some disrupted daytime metabolic rhythms and unperturbed nighttime signals from the master clock, which may be the basis of their increased risk of disease.

Circadian Rhythms, Genes, and Our Environment 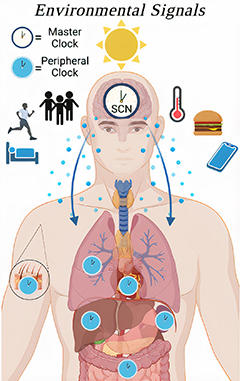 The circadian clocks are reset by environmental signals and social behaviors. (Image courtesy of Shobhan Gaddameedhi)

To better understand the mechanisms underlying the increased risk of cancer associated with circadian rhythm disruption from shift work, Gaddameedhi’s research team and their collaborators studied the expression of cancer-related genes in human volunteers on a simulated night shift schedule. They found that simulated night shift altered the normal circadian rhythm of genes involved in DNA repair and increased sensitivity to DNA damage. According to the team, night shift schedules may decrease DNA repair activity, possibly leading to more DNA damage and higher cancer risks for workers.

Recently, Gaddameedhi’s team has been studying how circadian rhythms are linked to DNA repair mechanisms that protect against skin cancers, and how night shift work can interfere.

“The skin is constantly exposed to air pollutants, other environmental contaminants, and ultraviolet (UV) light from the sun. UV exposure causes DNA damage that can lead to skin cancers,” Gaddameedhi said.

The skin produces a pigment called melanin that absorbs UV radiation, protecting surrounding cells from DNA damage, he explained. His team found that one of the primary proteins involved in the control of the circadian clock also regulates the expression of a protein required for melanin synthesis.

“Our findings suggest that both DNA repair and melanin production, which is basically tanning, are regulated by the circadian clock,” Gaddameedhi said. “Clock disruption potentially influences the outcome of these two defensive mechanisms.” 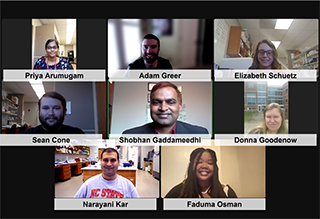 In 2020, just as the COVID-19 pandemic began, Gaddameedhi was one of six environmental health scientists to receive an Outstanding New Environmental Scientist (ONES) award from NIEHS, which supports early-career scientists in developing innovative research programs.

He explained how the ONES Award motivated him to overcome challenges as labs shut down across the country and scientists faced many unknowns on how to maintain productive research.

“I strongly believe that this ONES Award will help in supporting my long-term commitment to a research career in the environmental health sciences field,” he noted.

As Gaddameedhi builds on his cutting-edge research program, he is also training the next generation of scientific leaders.

“Finding the right mentors is the key to success and very important for young investigators,” he said. “It is essential to set aside time to invest in mentorship and to have a transparent and respectful relationship that allows everyone to reach their potential while achieving collective long-term goals.”