Chen is also director of the Integrated Health Sciences Facility Core for the NIEHS-funded Center for Investigation of Environmental Hazards at New York University. In this role, she promotes translational research and encourages the use of biological specimens from new and existing cohorts. (Photo courtesy of Yu Chen)

Yu Chen, Ph.D., an epidemiologist at the New York University Grossman School of Medicine, studies how arsenic exposure may lead to cardiovascular disease (CVD), which affects the heart and blood vessels.

A longtime recipient of NIEHS funding, Chen says the topic of arsenic-induced CVD was previously overlooked because arsenic is traditionally considered a carcinogen, or cancer-causing agent. Her research shows that even low to moderate levels of arsenic exposure may increase the likelihood of CVD.

Chen first became interested in exploring the health effects of arsenic while in graduate school at Columbia University. There, she began conducting research alongside her mentor Habib Ahsan, Ph.D., a NIEHS grantee and director of the Health Effects of Arsenic Longitudinal Study (HEALS), a large cohort in Bangladesh. Arsenic contamination in drinking water is a major public health concern in Bangladesh, where millions of people are exposed to levels above the nationally acceptable limit. According to the World Health Organization, CVD is the leading cause of death globally; at least three-quarters of CVD-related deaths occur in low- and middle-income countries like Bangladesh.

Part of Chen’s research involves using preclinical markers to assess the likelihood of CVD in HEALS participants. For example, Chen and her team use data on blood pressure and electrical heart signals from HEALS participants to assess the effects of arsenic on a person’s cardiovascular system. They also use another marker called carotid intima-media thickness, which indicates the thickness of the carotid artery. The carotid artery carries blood and oxygen to the brain from the heart; thickening of the artery is typically a result of atherosclerosis, or plaque buildup. 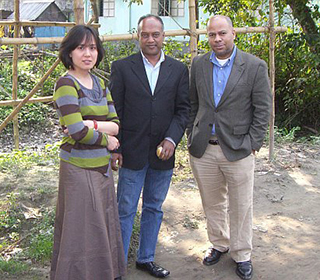 Chen and her team are also studying arsenic methylation capacity — a measure of how the body breaks down and metabolizes arsenic.

In 2009, Chen received the NIEHS Outstanding New Environmental Scientist (ONES) Award to explore how genetic polymorphisms, or small variants in the DNA sequence, may increase the likelihood of CVD in HEALS participants exposed to low or moderate levels of arsenic in drinking water. Chen with a group of children in Bangladesh in 2011. She said the NIEHS ONES award gave her time and resources to learn more about the impacts of arsenic exposure in Bangladeshi communities. (Photo courtesy of Yu Chen)

For this work, Chen and her team used data and blood samples from a subset of HEALS participants who had either died from CVD, were still living with the illness, or had no history of CVD at the time of follow-up. They examined polymorphisms in 17 genes and found that participants with variants in two genes were more susceptible to CVD when exposed to arsenic in well water. Previous studies have shown that those genes are associated with endothelial dysfunction, a condition that affects the lining of the heart and blood vessels.

Examining the Role of the Gut Microbiome

Emerging evidence shows that the gut microbiome, or the collection of microbes that naturally occurs in the gut, may play a role in arsenic-induced atherosclerosis and CVD.

In 2014, Chen received a NIEHS exploratory research grant to evaluate the role of the gut microbiome in methylation capacity and how it affects the possibility of atherosclerosis following arsenic exposure.

The team recruited 250 participants from HEALS and collected fecal samples. In one study, they found a positive association between certain microbes in fecal samples and carotid artery thickness. Specifically, they found an association between microbes from the Citrobacter species and carotid artery thickness, especially among HEALS participants with higher levels of arsenic exposure. This microbial species is implicated in infective endocarditis, inflammation in the lining of the heart’s chambers and valves.

Chen is also passionate about working with early career scientists. She has mentored several graduate students, many of whom now work in academic research or scientific industries.

“I teach my students that passion and focus are needed for a successful career in research,” Chen says.

She also highlighted the value of funding and support, such as the NIEHS ONES award, which helped launch her career. “Just like me, young scientists need a lot of support,” she said. “They need the protected time and resources to pursue their interests.”