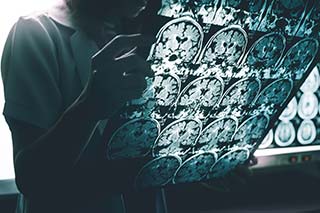 Neurodegenerative diseases occur when nerve cells in the brain or peripheral nervous system lose function over time and ultimately die. Although certain treatments may help relieve some of the physical or mental symptoms associated with neurodegenerative diseases, slowing their progression is not currently possible, and no cures exist.

Scientists recognize that the combination of a person’s genes and environment contributes to their risk of developing a neurodegenerative disease. For example, someone might have a gene that makes them more susceptible to Parkinson’s disease, but their environmental exposures can affect whether, when, and how severely they are affected.

Critical research entails examining exposures that may have occurred before a disease diagnosis and understanding their effects.

NIEHS funds researchers who study how exposures to pesticides, pollution, and other contaminants affect neurodegeneration, either individually or in combination with specific genes.

NIEHS also provides funding for career development programs to support researchers and cultivate the next generation of leaders in the field.

Learn more about environmental factors that may be associated with Parkinson’s Disease in the NIEHS Health and Education portal.