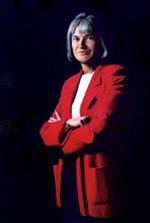 Karen E. Wetterhahn, Ph.D., Professor of Chemistry and the Albert Bradley Third Century Professor in the Sciences at Dartmouth College, died June 8, 1997 at age 48. Her death was the result of dimethylmercury poisoning caused by the accidental spill of a few drops of the chemical on her latex glove-covered hand. Dr. Wetterhahn was an established authority on the effects of heavy metals on biological systems as well as a dedicated teacher and mentor. She played an integral role in the administration of the sciences at Dartmouth and co-founded Dartmouth's Women in Science Project (WISP), which is aimed at increasing the number of women majoring and taking courses in the sciences, including mathematics and engineering.

A Lasting Legacy in Science and Mentorship

In recognition of the 25th anniversary of the death of Karen Wetterhahn, Ph.D., the NIEHS SRP released a Public Health Impact story reflecting on her continued legacy in scientific excellence and mentorship.

Dr. Wetterhahn served as the Program Director of the Dartmouth College Superfund Research Program (SRP) in Hanover, New Hampshire from 1995 to 1997. In addition to overseeing the program, she was a Principal Investigator who studied the effects of toxic heavy metals on cellular processes. An acknowledged international expert in chromium carcinogenicity, Dr. Wetterhahn was a leader in conducting research on how metals initiate cancer and other metal-induced human diseases at the molecular level. She fostered links between biology, chemistry, environmental studies, engineering, and the medical school. "The life sciences are interdisciplinary" Wetterhahn insisted.

Her untimely death has given us an opportunity to reflect on the value of understanding how heavy metals can interfere with important cellular processes that are vital to life. As a way of honoring the life and scientific accomplishments of Dr. Wetterhahn, the SRP has established an annual award to recognize an outstanding graduate student or post-doctoral researcher that best demonstrates the qualities of scientific excellence exhibited by Dr. Wetterhahn.

The recipient of the Karen Wetterhahn Memorial Award receives support to one major scientific conference, in addition to travel funds to attend the Superfund Research Program Annual Meeting where the awardee is invited to present their research. The recipient is also invited to present their research at NIEHS and to meet with staff and to learn about NIEHS. Nominations are accepted from scientists directing projects funded by the SRP