The advent of next generation sequencing has revolutionized the manner in which DNA is sequenced and genomic events are monitored. RNA-Seq has the potential to capture the expression of every gene and its isoform(s) genome-wide. Modeling alternative tandem 3’UTRs in a dynamic fashion is an important problem in post-transcriptional regulation of mRNA and the progression of disease processes. This motivated the development of an RNA-Seq analysis method that specifically targets the 3’ UTR and dynamically models gene expression termination at polyadenylation sites. Here, RNA-Seq data and a dynamic approach are used to identify shortening of 3’UTRs. The approach uses a Poisson hidden Markov model (PHMM) to 1) estimate (hidden) states of gene expression levels in terminal exon 3’ UTRs, 2) infer shortening of the region and 3) demonstrate alternative polyadenylation. 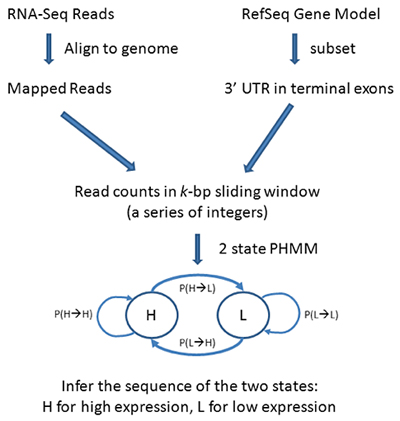 The Poisson-based hidden Markov model (PHMM) is used to capture the sequence of read counts. In a PHMM one considers a sequence of discrete observations

, which are assumed to be generated from a sequence of unobservable finite state Markov chains

with a finite state space

, and the random variable Yt conditioned on Xt has a Poisson distribution for every t. Specifically, if

, the emission probabilities are given by a Poisson distribution with parameter

Next let Yi,j be the transition probability from state i at time t – 1 to state j at time t, and assume

. By defining the emission and transition probabilities, along with the initial state probabilities, one can estimate all the unknown parameters for a given observed sequence

, using the maximum likelihood approach. In the RNA-Seq case,

is a sequence of read counts with

is the number of k-bp sliding windows in a 3’ terminal exon. Fit the sequence with a two-state PHMM, i.e.

with parameters estimated by the Expectation and Maximization (EM) method. Transcripts with potential shortened 3’ UTRs (i.e. having 2 or more states) were selected based on the Bayesian information criterion (BIC) of the model fits as follows:

A Readme file is included to instruct on the execution of the scripts. Report bugs, corrections, and suggestions to Pierre Bushel at bushel@niehs.nih.gov.

This is U.S. government work. Under 17 U.S.C. 105 no copyright is claimed and it may be freely distributed and copied.