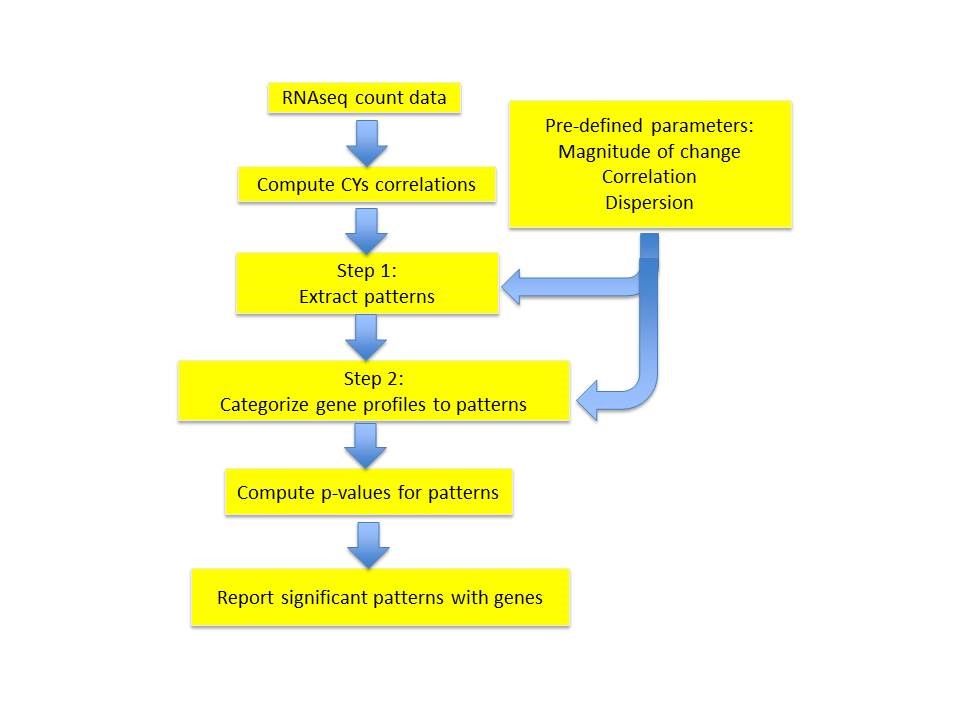 and a is the total number of samples with read counts mapped to either profile.

The strength of a gene expression profile’s signal is defined according to the value of the test-statistic location parameter obtained from a Wilcoxon rank sum non-parametric test measuring the difference between the ranks of the expression of the genes in sample X vs those in sample Y. Here, sample X is the biological replicates from the treated, perturbed or diseased group and sample Y is the biological replicates from the controls. The gth gene expression profile’s signal is therefore:

When the sample size for each group is small (i.e., ≤ 30), the estimation of the Z-statistic from the Wilcoxon rank sum test can be spurious. In such a case, the strength of the gth gene’s differential expression is the value of the Hodges-Lehmann location parameter estimator

for the difference between two groups. Briefly,

Count data is known to be dispersed. The variance-to-mean ratio (VMR) is a measure of dispersion (

) and is the inverse of signal to noise. If

is larger than 1, a data set is said to be overdispersed.  For each gth gene expression profile,

is estimated using a quasi-Poisson regression to model the data. For Poisson distributed data, the variance is equal to the mean, i.e., V(Yg) = E(Yg) =

. The quasi-Poisson likelihood model is commonly used for overdispersed count data as it incorporates the dispersion parameter

into the Poisson model. In doing so, the variance of the response (Yg) is a linear function of the mean, V(Yg) =

and dispersion estimated as

where n is the sample size, c is the number of estimated parameters and

, where for the gth gene expression profile in the jth sample, Y is the read count, X is the independent variable and

is the random error term

Once the patterns have been extracted, the

measure is used to correlate the ith profile to the kth pattern. The profile is assigned to the pattern to which it has the highest similarity to. Once all the profiles are assigned, a representative profile for each of the patterns is determined by the highest median correlation to the other profiles in the pattern. Briefly, for the ith gene expression profile and for the kth pattern it is assigned to, a Pattern Correlation Score

is computed as the median of the correlations among the ith profile (xi) to all other profiles (xj) assigned to pattern k (Pk). Until no more profiles are reassigned, the

measure is used to correlate the ith profile to the kth pattern and assign it to the pattern with which it has the highest correlation. Since the CYs does not denote the directionality of the correlation, the assignment of a profile is done if and only if, corr(ind(Zi),ind(Zj)) for all groups = 1. Here corr() is the Pearson correlation and ind() is the indication of + or – of the location parameter Z.

Report bugs, corrections and suggestions to Pierre Bushel at bushel@niehs.nih.gov and Jianying Li

Public Domain Notice
This is U.S. government work. Under 17 U.S.C. 105 no copyright is claimed and it may be freely distributed and copied.