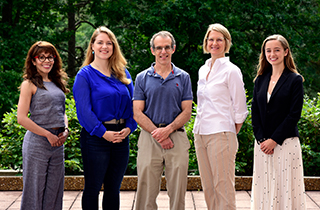 Elisa Núñez Acosta is a graduate of Universidad Nacional Autónoma de México, where she earned a Bachelor's degree in Chemistry and a PhD in Biomedicine. After finishing school, Elisa joined as a postdoctoral fellow a research team in Computational Biology at the Mount Sinai Hospital in New York City. After returning to México, she has been working as a researcher for an organization that provides science advice to the Mexican government. As part of her job, she reports on the implementation of new technologies and their possible impacts, as well as bioethical issues and current legislation. The internship in bioethics with Dr. Resnik represents an opportunity for her to study real cases about ethical issues in basic and clinical research with humans, and will allow to improve her awareness and experience about the ethical basis needed to develop policies to benefit safely from technology.

Julia Hecking is a 2019 graduate of Mount Holyoke College in South Hadley, MA, where she majored in Neuroscience and Behavior, and completed a certificate in Culture, Health, and Science. During her time as an undergraduate, Ms. Hecking completed a National Science Foundation REU research project at the University of Connecticut during which she investigated neuronal diversity in the lateral hypothalamic area. She also participated in research studying the role of nucleosome remodeling on drug-associated behaviors during her Junior and Senior years at Mount Holyoke. She is interested in medicine and is planning on pursuing a career that connects the fields of science, bioethics, and law.

Aubrey Incorvaia began pursuing a Ph.D. at Georgia Tech’s School of Public Policy in the fall of 2018; she is targeting research related to Patient and Public Involvement in Research and the Coproduction of Scientific Knowledge. Aubrey began her career as a licensed social worker in Ohio, serving a wide range of populations, before attaining her Master of Public Policy from Duke in 2009. She has worked in local and state government – in a cabinet level agency and at the state legislature within its nonpartisan Fiscal Research Division. Just prior to starting doctoral work, she directed a website on Science and Technology Policy at Duke University.

Sophie Schott is an undergraduate student at the University of Texas at Austin, where she double majors in History and Humanities with a concentration in Bioethics and Biomedical Policy. At the University of Texas, Schott is a Frank Denius Normandy Scholar and a Writing Fellow in the Liberal Arts Honors Program. As a Normandy Scholar, she researches bioethics in Japan and Germany during the Second World War. Schott also works in the Osier Laboratory at Dell Medical School, which investigates biomarkers associated with pediatric traumatic brain injury. Her interests include science communication, assisted reproductive technologies, and global health. After graduation, she aspires to pursue a career in clinical medicine and bioethics.