The Nucleolar Integrity Group investigates the regulation and molecular mechanisms of ribosome biogenesis through a multidisciplinary combination of structural, molecular, and cellular biology. All cells required ribosomes for the translation of mRNA into proteins. Eukaryotic ribosome biogenesis is a complex process that involves the assembly of 79 ribosomal proteins with 4 ribosomal RNAs through the concerted effort of more than 200 non-ribosomal biogenesis factors within the nucleolus of the cell. Dysfunction of this pathway gives rise to a group of human diseases known as ribosomopathies and deregulation of the pathway had been linked with numerous types of human cancers.

Ribosome biogenesis is one of the most energetically costly endeavors for a cell, at times using up to 80 percent of cellular energy resources. As a result, the process needs to be tightly regulated with cell cycle progress and environmental stimuli. The majority of cellular signaling pathways converge on the nucleolus, and cellular stressors, such as irradiation or environmental hazards, lead to a reorganization of the nucleolus. The group seeks to determine how cellular stressors effect ribosome biogenesis and the integrity of the nucleolus. 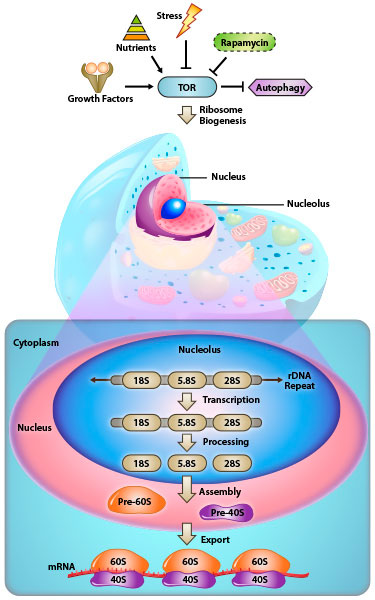 An illustration of ribosome production.

Stanley, an Earl Stadtman Tenure-Track Investigator, earned her B.S. in chemistry and B.A. in mathematics from the University of North Carolina at Charlotte. She earned her Ph.D. in molecular biophysics and biochemistry at Yale University, where she worked under Nobel Laureate Thomas Steitz. Before joining the NIEHS in 2014, she was a postdoctoral fellow with James H. Hurley at the National Institute of Diabetes, Digestive, and Kidney Diseases.