Gene-Environment Interaction in Disease and Aging

Xiaoling Li, Ph.D., heads the Metabolism, Genes, and Environment Group and holds a secondary appointment in the NIEHS Epigenetics and Stem Cell Biology Laboratory. The long-term goal of Metabolism, Genes, and Environment Group is to understand how cellular metabolism mediates environmental influences on cellular functions through interaction with epigenetic modification enzymes, and to further investigate how dysregulation of this interplay contributes to pathogenesis of diseases and aging.

To achieve this goal, the group focuses on a cellular metabolic sensor, SIRT1, and protein acetylation/acylation. SIRT1 belongs to a family of highly conserved NAD+-dependent protein modification enzymes called sirtuins. They are capable of removing a wide range of lipid lysine acyl-groups, including acetyl-group, from protein substrates in a NAD+-dependent manner. These NAD+-dependent activities enable sirtuins to monitor cellular energy status and modulate gene transcription, energy metabolism, and genome stability in response to environmental signals. These activities are also important for cell survival in response to various environmental stressors and are required for lifespan extension provided by calorie restriction (CR) in a number of model organisms. Therefore, sirtuins are essential genetic factors that directly link the environment to animal physiology, providing us a unique opportunity to study gene-environment interactions during the processes of disease and aging. 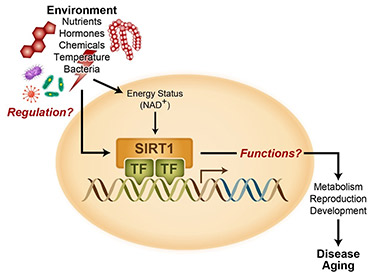 SIRT1 is a vital metabolic sensor that directly couples the environmental signals and cellular metabolic status to the chromatin structure and gene expression, thereby modulating metabolism, reproduction, and development. Those functions of SIRT1 ultimately impact more complex biological phenomena, such as disease and aging.

Li received her Ph.D. in Biological Chemistry from the Johns Hopkins School of Medicine in 2002. She was a Leukemia & Lymphoma Society postdoctoral fellow in the laboratory of Leonard Guarente at Massachusetts Institute of Technology before joining NIEHS in 2007.