Humphrey Yao, Ph.D., leads the Reproductive Developmental Biology Group in the Reproductive & Developmental Biology Laboratory (RDBL) at NIEHS. He also holds a secondary appointment in the NIEHS Epigenetics & Stem Cell Biology Laboratory. The main thrust of his group is to define the normal process of how embryos establish their sex-specific reproductive organs, and investigate whether this process is susceptible to in utero exposure to endocrine disruptors or maternal stress.

Compelling animal evidence and human epidemiological data have revealed that impairment of fetal organ development has profound consequences on adult health. The concept of "fetal origins of adult diseases" also applies to the reproductive systems where formation of most reproductive organs is completed before birth. Defects in reproductive organ formation manifest as disorders of sex development. However, minor abnormalities are often left undetected and become a potential cause of fertility problems and neoplasia when the affected individual reaches adulthood.

The Reproductive Developmental Biology Group uses organogenesis of the gonads, reproductive tracts, and external genitalia as a model to delineate the basic process of organ formation and the potential implication of the impacts of environment on reproductive organ formation in fetuses and fertility in adulthood. Reproductive organs are one of the few organs that exhibit dramatic sex-specific pattern of dimorphic development. This unique pattern of development provides a model to understand not only the mechanism of sex determination, but also how progenitor cells make the decision to differentiate into tissue-specific cell types, the fundamental concept of embryology. 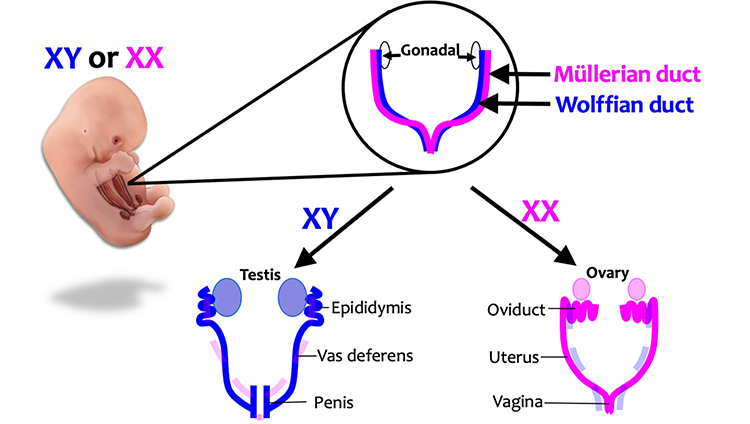