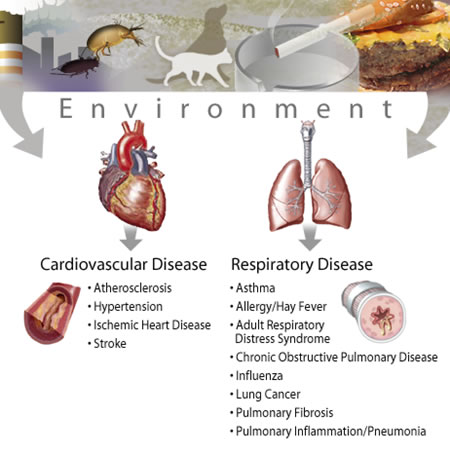 Darryl C. Zeldin, M.D., is NIEHS Scientific Director, head of the Environmental Cardiopulmonary Disease Group, and holds a secondary appointment in the Clinical Research Branch.  The group conducts basic and clinical/translational research to better understand the role of the environment in the etiology and pathogenesis of respiratory and cardiovascular diseases such as allergy, asthma, adult respiratory distress syndrome, pulmonary fibrosis, atherosclerosis, hypertension, ischemic heart disease, and stroke.

Opportunities for translational research in this area include development of new drugs for blood pressure control, atherosclerosis and ischemic heart disease. Identification of individuals at increased risk for these disorders due to P450 genetic variation may also lead to new approaches to disease prevention.

The group has also conducted studies to examine the role of cyclooxygenases in lung function and disease. The work, based on the hypothesis that cyclooxygenase-derived eicosanoids (prostaglandins) are important modulators of the lung immune response to environmental agents, such as allergens and bacterial lipopolysaccharide, involves development and phenotypic characterization of new transgenic knockout mouse models. This research will lead to additional opportunities for mechanistic and translational research in a variety of inflammatory lung diseases.

Lastly, the group is active in clinical research on the role of the environment in the pathogenesis of asthma and allergic diseases. The group's research focuses on indoor allergen exposures, and other potential risk and modifying factors (e.g. endotoxin), which are associated with the development and exacerbation of allergic respiratory diseases. The group has conducted large national studies which have not only resulted in a better understanding of the characteristics and predictors of indoor allergen and endotoxin exposures in U.S. households, but also have provided information on the importance of these exposures in asthma and other allergic diseases that are of significant public health concerns nationally and globally. This work will provide sound scientific basis for the development and implementation of environmental interventions that will be effective in the management and/or prevention of asthma and allergic diseases.

Zeldin earned a B.A. in chemistry from Boston University in 1982 and an M.D. from Indiana University School of Medicine in 1986. He completed a Residency in Internal Medicine at Duke University in 1989 and a Fellowship in Pulmonary/Critical Care Medicine at Vanderbilt University in 1993. Zeldin, a physician-scientist who is internationally recognized for his contributions to the fields of environmental health, respiratory disease and cardiovascular disease, is an elected member of the American Society for Clinical Investigation (ASCI), American Association of Physicians (AAP), a Fellow in the American College of Chest Physicians and a Fellow in the American Heart Association.

He has served on NIH and foundation study sections and is a member of the editorial boards of several scientific journals. He has published over 285 peer-reviewed articles in leading biomedical journals, as well as numerous reviews and book chapters. Zeldin is on staff at Duke University Medical Center/Durham VA, where he serves as an attending physician on the pulmonary consult service and the medical intensive care unit. He served as the NIEHS Clinical Director from 2007-2011 and currently serves as the NIEHS Scientific Director.