Anton M. Jetten, Ph.D., is Head of the Cell Biology Group in the Immunity, Inflammation, and Disease Laboratory, and holds a secondary appointment in the NIEHS Epigenetics and Stem Cell Biology Laboratory. Work performed by members of the Cell Biology Group has led to the discovery of a number of novel transcriptional regulators: several orphan nuclear receptors (Project I) and the GLI-Similar (GLIS) proteins (Project II). Subsequent studies revealed that these proteins play critical roles in the regulation of many physiological processes (development, immunity, metabolism, differentiation of several stem/progenitor cells) and are implicated in several major human pathologies (e.g., diabetes, cancer, metabolic syndrome, neurological disorders, cystic kidney disease, autoimmune disease). The goal of this research is to understand the mechanism by which these transcription factors regulate gene expression in relation to their physiological functions and roles in disease. The study of these signaling pathways might lead to novel therapeutic strategies in the management of disease and provide a better understanding of the role of environmental factors in various pathologies.

The research in this project is focusing on the study of the retinoic acid-related orphan receptors RORα and RORγ, the latter of which was discovered by our laboratory. RORs regulate transcription by binding as monomers to ROR response elements (ROREs) consisting of the RGGTCA consensus, in the regulatory regions of target genes. RORs act as ligand-dependent transcription factors. A number of cholesterol metabolites bind RORs and function as (inverse) agonists modulating either positively or negatively ROR transcriptional activity and consequently the physiological processes regulated by RORs. RORs play a critical role in the regulation of many physiological processes, including embryonic development, immunity, various metabolic pathways, and neural processes, and are relevant to an increasing number of pathologies, including autoimmune disease, metabolic syndrome, cancer, and various neurological disorders. RORs regulate glucose and lipid metabolism and loss of RORα or RORγ function improves insulin sensitivity and reduces the development of metabolic syndrome. RORγ plays a critical role in the differentiation of Th17 and ILC3 cells, while loss of RORγ reduces the generation of these proinflammatory cells as well as development autoimmune disease in experimental models. Current research is focusing on the identification of ROR target genes using ChIP-Seq using in vitro stem/progenitor cells and tissue-specific ROR knockout mice.

The GLI-Similar 1-3 (GLIS1-3) proteins form a subfamily of Krüppel-like zinc finger transcription factors discovered by our laboratory. They regulate transcription by interacting with G-rich GLIS binding sites (GLISBS) in the promoter of target genes. The GLI-Similar (GLIS) proteins play a critical role in the regulation of several biological processes and can function as transcriptional activators or repressors. GLIS3 is essential for the generation of pancreatic beta cells and insulin gene expression, thyroid hormone synthesis, spermatogenesis, and the maintenance of normal kidney functions. In humans and in mice, GLIS protein have been implicated diabetes, leukemia, hypothyroidism, glaucoma, inflammation, fibrosis, neurological disorders, and cystic kidney disease. GLIS3 directly regulates the transcription of the insulin gene, several WNT genes, and the iodide transporters, NIS and Pendrin. The GLIS signaling pathways might provide novel therapeutic targets for these diseases. To elucidate the biological functions of GLIS proteins further, our current research is focusing on the regulatory role of GLIS proteins in the differentiation of mouse and human pluripotent stem cells (PSCs) along different cell lineages and the characterization of tissue-specific GLIS knockout mice. The identification of GLIS target genes and their transcription regulation by GLIS proteins is examined by RNA-Seq and ChIP-Seq analysis. 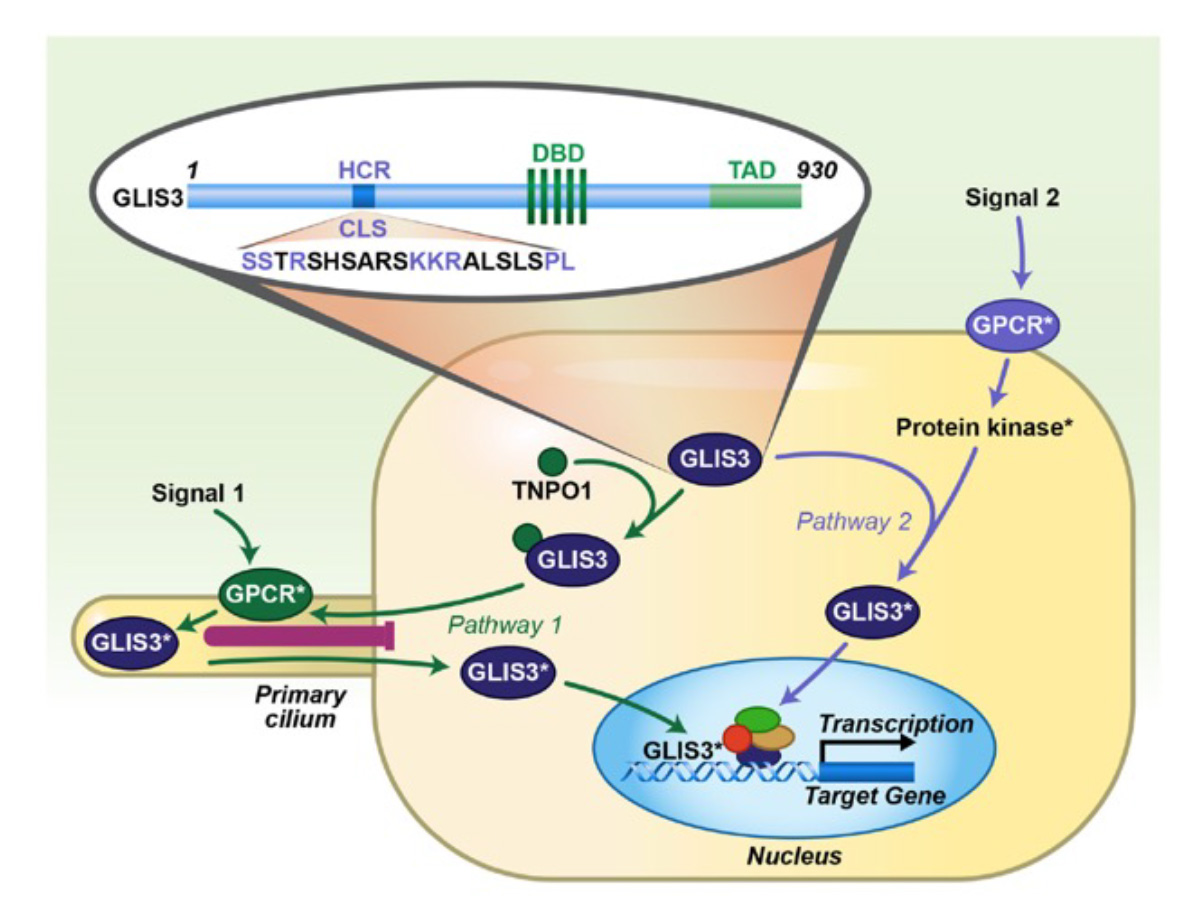