Dmitry Gordenin, Ph.D., is head of the Mechanism of Genome Dynamics Group and holds a secondary appointment in the NIEHS Biostatistics and Computational Biology Branch.

Members of the Mechanisms of Genome Dynamics Group are interested in identifying the mechanisms, genetic defects, and environmental factors that lead to the extreme risks of genome instability. The outcomes of their work encompass areas of DNA replication and various DNA repair pathways. Methodology includes the state of the art yeast experimental models, as well as sequencing and bioinformatics analysis of yeast and human genomes, turning them into reporters of genome instability.

Over the past years the group’s scientists have established several important phenomena in the field of mutagenesis, such as mechanisms of instability associated with long inverted repeats, escape of long homonucleotide runs from DNA polymerase proofreading, mutagenesis mediated by environmental inhibition of mismatch repair, new biological roles of DNA polymerase 3'5' exonuclease in mismatch repair and in Okazaki maturation, as well as a general phenomenon of damage-induced localized hypermutation generating mutation clusters in yeast and in human cancers. They also developed new ways to analyze data sets of cancer genome mutations, which led to identification of APOBEC cytidine deaminases as an endogenous mutagen ubiquitous in human cancers. 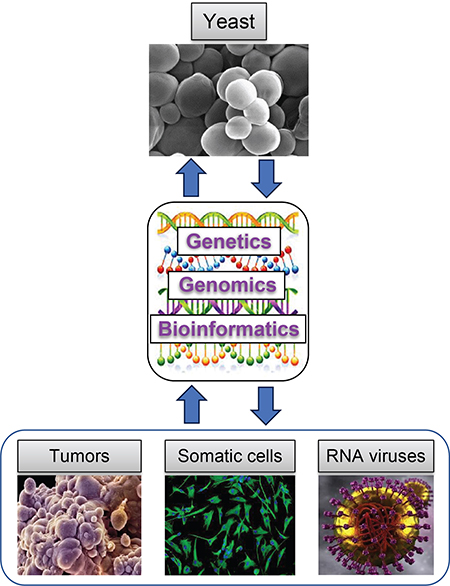 Gordenin received his doctorate in genetics in 1978 from St. Petersburg State University in Russia, and continued his research there as a faculty member in the Department of Genetics. A collaboration with Michael Resnick, Ph.D., in 1989 eventually led to Gordenin joining Resnick’s group in 1994. Several of Gordenin’s papers have been included in the NIEHS Papers of the Year (2003, 2004, 2007, and 2009), and he received the NIEHS Outstanding Staff Scientist Award in 2009. He was promoted to Senior Associate Scientist in 2010 and became head of Mechanisms of Genome Dynamics Group in 2014.

Limiting the rate of genetic changes to biologically sustainable level is a major factor required for existence of all species in the environment as well as for human health. Understanding the interplay between biological mechanisms maintaining stable genome and environmental factors placing genome stability at risk is important for charting ways to a better environment and human health, and can result in significant improvements in environmental and health policies.