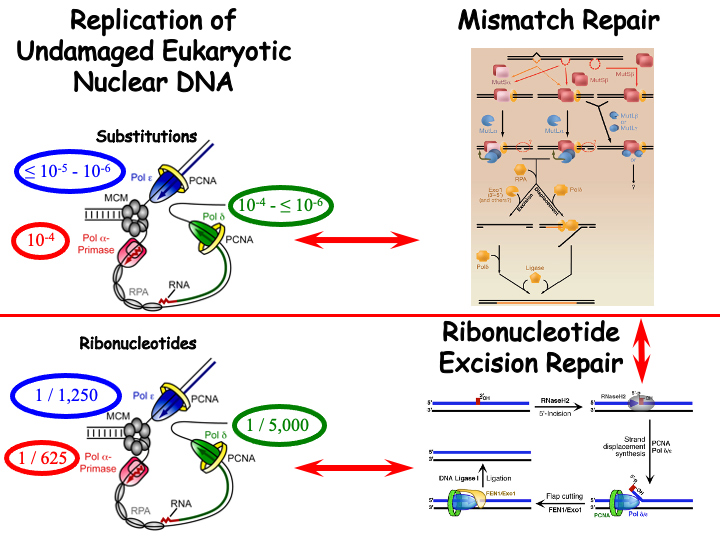 As its name implies, the DNA Replication Fidelity Group performs research aimed at understanding the DNA transactions that determine DNA replication fidelity. For example, several repair processes operate prior to DNA replication to remove the many types of DNA damage generated by endogenous cellular metabolism or exposure to the environment. These processes provide undamaged substrates for efficient and highly accurate DNA replication. High replication fidelity depends on the ability of DNA polymerases to select correct, rather than incorrect, nucleotides for incorporation into DNA without adding or deleting nucleotides. Polymerase selectivity is a prime determinant of fidelity at the replication fork and also during DNA synthesis associated with repair.

The group is actively investigating many of these processes and how the environment perturbs them, thereby resulting in adverse effects on human health. For example, failure of the systems that determine replication fidelity can lead to mutations that underlie diseases such as cancer and hereditary neurodegenerative diseases. Accumulation of environmentally-induced DNA damage and mutations may contribute to aging. Structure-function studies of polymerases are relevant to the emergence of drug-resistant viruses and may be useful for drug design. Describing the functions of mismatch-repair proteins improves understanding of cellular responses to environmental stress and the efficacy of chemotherapeutic agents, the origins of certain forms of cancer, the emergence of antibiotic-resistant pathogenic bacterial and the development of normal germ cells. Finally, we study the incorporation of ribonucleotides into DNA during normal replication, the processes by which they are removed, and the evolutionary and mutagenic consequences of their presence and/or removal from DNA. Studies of mutations and putative functional polymorphisms in the genes encoding proteins participating in DNA replication fidelity processes are important for understanding individual variability in susceptibility to environmental diseases.

Interview with Thomas Kunkel, Ph.D., conducted on Aug. 9, 2017 can be found on the NIH Office of History - NIEHS Interviews webpage.

Thomas A. Kunkel, Ph.D., leads the DNA Replication Fidelity Group within the Genome Integrity and Structural Biology Laboratory. Kunkel has published numerous peer-reviewed articles in leading scientific journals, as well as several book chapters. He received his doctorate in 1977 from the University of Cincinnati. Following a postdoctoral fellowship at the University of Washington, he joined the NIEHS in 1982.