Heparan sulfates (HS) are highly sulfated polysaccharides found on the surface of mammalian cells attached to core proteins and can also be secreted into the extracellular matrix. HS can influence a wide range of physiological and pathophysiological functions such as viral/bacterial infection, angiogenesis, embryonic development and blood coagulation through interactions with proteins such as growth factors, protease inhibitors, proteases, cytokines, chemokines and morphogens. Many of these interactions depend on specific sequence contexts and sulfation patterns along the HS chain. HS is mainly composed of repeating disaccharide units of glucuronic (GlcA) or iduronic acid (IdoA) along with glucosamine (GlcN). These HS chains are modified in the Golgi by modifying enzymes including a C5-epimerase that converts GlcA to IdoA and a N-deacetylase/N-sulfotransferase which can deacetylate then sulfate the N-acetyl group of GlcN. In addition to these enzymes, there is a sulfotransferase (2-OST) that can sulfate the 2 position of the GlcA or Ido and sulfotransferases that can sulfate the 3- and 6- positions (3-OSTs and 6-OSTs respectively) of the GlcN saccharides. Depending on the cell type and isoforms of the sulfotransferases being expressed different sulfation patterns can occur generating HS that interact with different proteins.

The most characterized example of HS specificity is a highly sulfated form of HS known as heparin, which has a rare 3-O-sulfation that allows it to bind anti-thrombin with high specificity, inducing a conformational change that allows anti-thrombin to inhibit the blood clotting enzymes thrombin and Factor Xa. Heparin purified from pigs is widely used in the clinic as a potent anticoagulant whose activity can be reversed by administering protamine. One downside of heparin is that it is naturally heterogenous and can, on rare occasions, induce thrombocytopenia that can lead to loss of limb, pulmonary embolism, and death.

Current technology being developed by Jian Liu at the University of North Carolina allows for the production of homogeneous HS for therapeutic purposes using a technique known as chemoenzymatic synthesis that utilizes the specificities of the sulfotransferases to generate the desired sulfation pattern. This technique can be used to generate HS that is a potent and reversible anti-coagulant that should have fewer side effects than heparin. In addition, it is conceivable that the synthesis may be tailored to treat other ailments such as inflammation or cancer. Recently Dr. Liu’s lab has demonstrated the ability to synthesis a non-anticoagulant HS that is protective against acetaminophen-induced acute liver failure in mice. 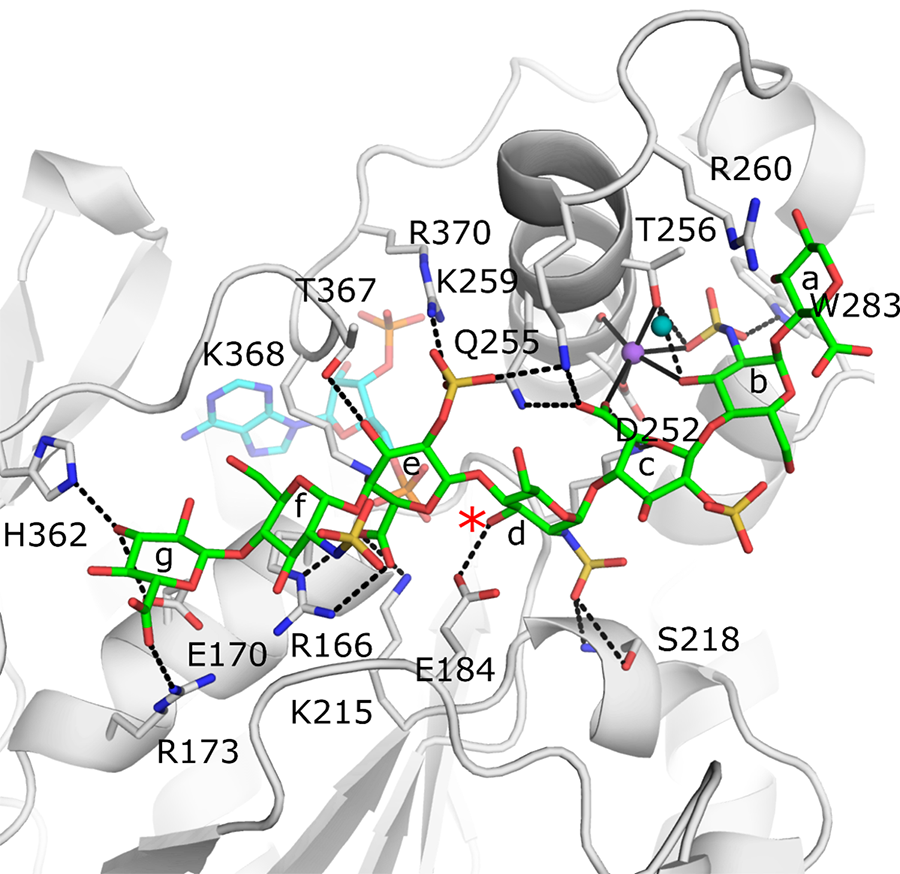 Crystal Structure of the active site of 3-O-sulfotransferase 3 with a bound octasaccharide (green) and co-factor product PAP (cyan). The position of the acceptor 3-OH is marked with a red asterisk. Black dashed lines represent potential hydrogen bonds between the protein and the saccharide that help dictate specificity.