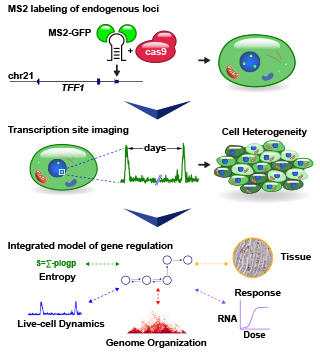 Current technology allows the group to image transcription sites in real time, leading to an understanding of how heterogeneity in gene expression is regulated.

The group’s understanding of gene regulation is mostly based on studies that assay whole tissues and bulk cell lysates. Single Cell Dynamics Group is interested in understanding why genetically identical cells respond heterogenous to environmental stimuli. Recent research suggests that in diseases, such as cancer or the process of aging, expression variability increases in tissue. Determining the factors and mechanisms that regulate this variability will help us understand the differences between normal and diseased states. 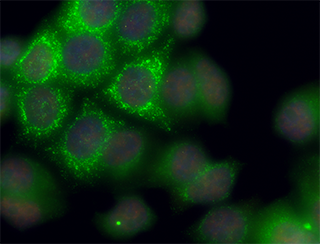 Rodriguez graduated from MIT in 2001 and worked for six years performing bioinformatics analysis of human genome assembly. In 2007, he began work under the direction of Nobel Laureate Michael Rosbash, Ph.D., at Brandeis University, studying RNA processing and circadian gene expression dynamics. Those efforts led to shared authorship on eleven publications, including first author papers in Molecular Cell and the Proceedings of the National Academy of Sciences. After receiving his doctorate in 2012, Rodriguez joined the laboratory of Daniel Larson, Ph.D., at the National Cancer Institute and studied transcriptional regulation of estrogen responsive genes in single human cells. He joined NIEHS in 2018.