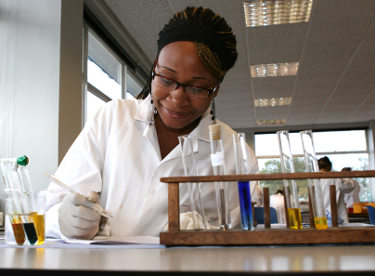 The mission of NIEHS is to discover how the environment affects people in order to promote healthier lives. The studies conducted at NIEHS are often long term and high risk in nature and involve unique components, such as epidemiological studies of environmentally associated diseases, toxicological testing of environmental substances and intervention and prevention studies to reduce the effects of exposures to hazardous environments.

There are 11 Branches and Laboratories in the Intramural Research Division. Intramural researchers work in the following research areas: 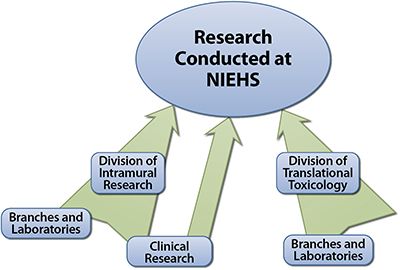 Division of the National Toxicology Program

NIEHS National Toxicology Program (NTP) Division scientists use a variety of traditional and cutting-edge approaches to better understand how factors in our environment may affect our health.

The division supports the National Toxicology Program (NTP), an interagency partnership that includes NIEHS, the National Center for Toxicological Research of the U.S. Food and Drug Administration, and the National Institute for Occupational Safety and Health of the Centers for Disease Control and Prevention. NIEHS Director Rick Woychik, Ph.D., also serves as NTP Director, and the program is headquartered at NIEHS.

DNTP efforts are guided by a strategic planning framework and carried out by researchers in the following five branches:

NIEHS supports and conducts clinical studies to determine how exposure to chemicals or other agents in the environment may influence a variety of diseases. Our Join a Health Study or Clinical Trial webpage has information for participants.

The Clinical Research Branch works with patients in two facilities:

At NIEHS, our scientists are highly interactive and are often engaged in interdisciplinary research that encourages novel ideas, innovative hypotheses, and new paradigms.