For decades, scientists have known the basic structure of our DNA, the building blocks that make up our genes. Although nearly every cell in the human body has the same set of genes, why is it that different types of cells, such as those from brain or skin, look and behave so differently?

Some epigenetic changes are stable and last a lifetime, and some may be passed on from one generation to the next, without changing the genes.

Several epigenetic processes involve chemical compounds that attach, or bind, to DNA or to proteins that package the DNA within cells called histones. When a chemical compound binds to DNA, certain genes switch on or off, selecting which proteins are made.

For example, the epigenetic process of DNA methylation involves the binding of a chemical compound called a methyl group to certain locations on the DNA. This binding changes the structure of DNA, making genes more or less active in their role of making proteins.

Another process called histone modification involves chemical compounds that bind to histone proteins. Ribonucleic acids, or RNAs, are also present in cells and can participate in epigenetic processes that regulate the activity of genes.

DNA methylation and histone modification are normal processes within cells and play a role in development, by instructing stem cells, or cells capable of turning into more specialized cells, like brain or skin cells.

Epigenetic processes are particularly important in early life when cells are first receiving the instructions that will dictate their future development and specialization. These processes can also be initiated or disrupted by environmental factors, such as diet, stress, aging, and pollutants.

In 2005, a team of Italian researchers provided the first concrete evidence for the role of environmental epigenetics in explaining why twins with the same genetic background can have vastly different disease susceptibilities. 1   The researchers showed that, at birth, pairs of identical twins have similar epigenetic patterns, including DNA methylation and histone modifications.

However, over time, the epigenetic patterns of individuals become different, even in twins. Since identical twins are the same genetically, the differences are thought to result from a combination of different environmental influences that each individual experiences over a lifetime. 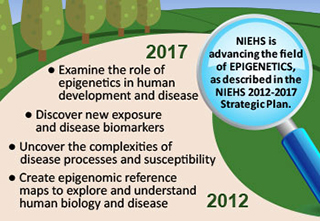 Investigating the effects of the environment on the epigenetic regulation of biological processes and disease susceptibility is a goal in the NIEHS 2012-2017 Strategic Plan.

NIEHS is currently supporting epigenetics research that is accelerating the understanding of human biology and the role of the environment in disease. These discoveries may lead to the development of new ways to prevent and treat diseases for which the environment is believed to be a factor.

NIEHS at the forefront of epigenetics research

In 2003, NIEHS-supported researchers made an important discovery that demonstrated the role of environmental epigenetics in development and disease. 2 They used the agouti mouse in their study. The mouse has an altered version of the agouti gene, which causes them to be yellow, obese, and highly susceptible to developing diseases, such as cancer and diabetes. 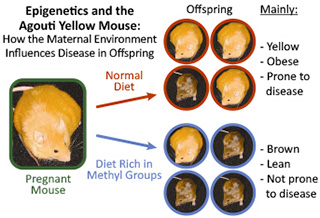 The researchers fed the mice a diet rich in methyl groups. Through epigenetic processes, the methyl groups attached to the mother’s DNA, and turned off the agouti gene. As a result, most of the offspring were born lean and brown, and no longer prone to disease.

This study was the first to demonstrate that it is not just our genes that determine our health, but also our environment and what we eat.

While researchers have known, for quite some time, the sequence of DNA that make up all human genes, collectively known as the genome, the same could not be said for the human epigenome, until recently. The epigenome refers to all of the chemical compounds added to the genetic material of an organism that regulate its function.

NIEHS and the National Institute on Drug Abuse (NIDA) co-led a national effort, through the NIH Roadmap Epigenomics Program, to create a series of epigenomic maps representing locations on the DNA where chemical compounds attached in more than 100 different tissue and cell types, including blood, lung, heart, gastrointestinal tract, brain, and stem cells. The groundbreaking work was featured in a 2015 article in the journal Nature. 3

By comparing the epigenomic map of a healthy cell or tissue, with the map of the same cell or tissue after an environmental exposure or in relation to a specific disease, NIEHS scientists can better understand how the environment affects genes through epigenetic processes. The epigenomic maps are available to the entire scientific community through the Washington University Epigenome Browser.

NIEHS-supported researchers at Harvard T.H. Chan School of Public Health have shown that human exposure to environmental air pollutants and toxic metals, such as arsenic, can cause damage to cells that may lead to cardiovascular disease. The research team has been tracking abnormalities in blood, as well as epigenetic changes, which may serve as indicators, or markers, of exposure to air pollution and toxic metals at levels that can increase the risk of cardiovascular disease, particularly in elderly men. These markers may help in the early detection and prevention of cardiovascular and other diseases. 4 , 5

Grantees at Beth Israel Deaconess Medical Center used epigenetics to define the link between environmental exposure to smoke, mercury, and lead, and reproductive outcomes, such as preterm birth. 6 , 7 Their results are important, since more than one in 10 infants worldwide is born prematurely, increasing their chances of having health problems later in life. 8 The study also found that epigenetic changes may serve as markers for maternal chemical exposure during pregnancy.

NIEHS scientists in the Epigenetics and Stem Cell Biology Laboratory are examining how epigenetic mechanisms influence normal cell development, and contribute to biological processes involved in breast cancer and immune function. To date, they have uncovered many details of how the protein complex Mi-2/NuRD controls genes involved in breast cancer. Mi-2/NuRD is found in the nucleus of cells and includes enzymes that affect histone modifications that regulate gene activity.

The research is helping to identify what genes are regulated by the complex and how the complex alters epigenetic processes that may contribute to disease. Understanding the underlying mechanisms of disease may lead to the development of new methods to diagnose, prevent, and treat diseases, such as breast cancer, in the future.

Researchers unravel role of epigenetics in development, inheritance, and disease

NIEHS-supported researchers have found that early-life exposure to nutritional and dietary factors, maternal stress, and environmental chemicals can increase the likelihood of developing disease and poor health outcomes later in life. In addition, some of the effects of these exposures can be passed down for multiple generations, even after the original exposure has been removed, through a process known as transgenerational inheritance.