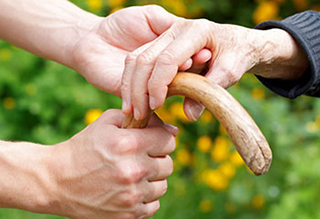 NIEHS is one of the lead research agencies studying environmental links to Parkinson’s disease. The institute works closely with other research programs within the National Institutes of Health (NIH), as well as partners and scientists across the country, to look at every aspect of this disease.

What Is Parkinson's Disease?

Parkinson's disease is neurodegenerative, the second most common disorder of this type after Alzheimer's disease.

Within your body, nerves transmit information to and from the brain or spinal cord, which affects muscles and organs. Neurodegeneration means that your nerves are not functioning normally. Parkinson’s disease is a progressive and unending movement disorder.

How Many People Are Affected by Parkinson's Disease?

Parkinson's may be the world's fastest growing brain disease. In 2016, scientists estimated about 6 million individuals had Parkinson's disease globally, compared with 2.5 million in 1990.

What Are the Symptoms of Parkinson's Disease?

There are also non-motor symptoms which may develop years before the onset of motor problems, which may include:

Disease warning signs, such as tremors, loss of grip strength, and gait disruption, begin gradually and typically worsen over time. Symptoms and their progression may vary. Parkinson's disease cannot be cured, but treatments and drugs can help control it.

The exact cause of Parkinson's disease is unknown. Most people diagnosed with Parkinson’s have a late-onset form of the disease, which does not have a clear genetic cause. Early-onset Parkinson's, defined as beginning before age 50, accounts for 2% to 10% of cases. This form may have a genetic cause. 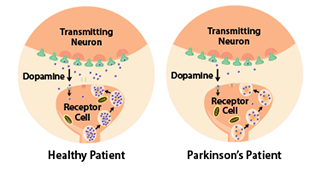 Studies have shown that the symptoms of Parkinson's usually appear when 50% or more of the dopamine neurons in the midbrain are lost. It progresses slowly as small clusters of neurons in the middle of the brain die. The gradual loss of these neurons results in reduction of a chemical called dopamine, which is responsible for transmitting messages to parts of the brain that coordinate muscle movement.

Parkinson’s disease destroys nerve cells in the brain, yet some researchers think it may start in the gut. Abnormal clumps of misfolded alpha-synuclein proteins have been found in the intestines of people with Parkinson’s disease. These clumps may cause nearby proteins to misfold and clump as well, triggering a chain reaction that travels all the way up the vagus nerve that connects directly to the brain.

There is a critical need for research investment that leads to better understanding of Parkinson’s disease. Identifying environmental exposures related to the onset of Parkinson’s may lead to new prevention and intervention strategies.

NIEHS supports diverse research, involving experts from many disciplines, to uncover what may cause or help prevent Parkinson’s disease. Varied methods are important because no one can predict which paths of study will provide major breakthroughs. Basic research on Parkinson's will continue to help us advance our understanding of the disease. Highlights from NIEHS research are described below, grouped by environmental factors that may affect Parkinson’s and by research approaches. 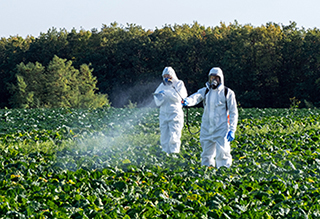 Pesticide exposure has consistently been associated with the onset of Parkinson's disease.

Some people are more vulnerable to the harmful effects of pesticides because of their age or genetic makeup.

Further research into links between preventable exposures and Parkinson’s disease, as well as preventative therapies, could help reduce the incidence of the disease. For example, using protective gloves and other hygiene practices reduced the risk of Parkinson’s disease among farmers using paraquat, permethrin, and trifluralin. 7

TCE is a chemical compound used in industrial degreasing, dry cleaning, and some household cleaning products. It can be released into the environment from industrial sites, contaminating air, water, and soil.

The National Toxicology Program states TCE is known to be a human carcinogen based on sufficient evidence of carcinogenicity from studies in humans. It has been linked to kidney, liver, and blood cancers.

NIEHS-funded researchers show exposure to TCE may affect protein kinase LRRK2, a gene that is active in the brain and other body tissues, and elevate the risk of Parkinson's.

Numerous studies over the years suggest that head injuries could contribute to Parkinson's disease through the death of dopaminergic neurons. Head injuries can be particularly damaging for people exposed to pesticides such as paraquat 8 as well as those who carry a genetic risk factor in the alpha-synuclein gene. 9 Individuals with head injuries who lived or worked near areas where paraquat had been applied were several times more likely to develop Parkinson’s disease.

Air pollution is a mixture of hazardous substances from both human-made and natural sources. The harmful effects of air pollution on the heart and lungs are well-documented, although effects on the brain are less understood. Recent studies suggest that air pollution might act on the biological pathways that are involved in Parkinson’s disease. For example, one study found that exposure to high air pollution levels caused neuroinflammation, an altered brain immune response, and an accumulation of toxic alpha-synuclein deposits starting in childhood. 10

When looking at the general population, a study by NIEHS researchers and their collaborators found limited evidence of an association between air quality and Parkinson’s disease risk. However, the study showed that gender and smoking status made a difference. The findings indicated that female nonsmokers exposed to high levels of particulate matter in air pollution had an increased risk of developing the disease. The research suggests further work is needed to study the impact of air pollution on this potentially vulnerable population. 11 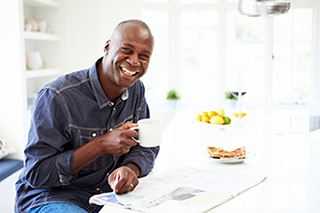 Diet and lifestyle factors may affect the development and progression of Parkinson's disease. Understanding the role that these factors could play in the disease could inform future prevention and treatment.

Caffeine. Caffeine may reduce the chance of developing the disease. NIEHS researchers looked at data from a large sample of older Americans, and found that higher caffeine intake was associated with lower risk of Parkinson's in both men and women. 12 A separate study found that Parkinson’s disease patients who were lifelong coffee drinkers had slower progression, less cognitive decline, and reduced mortality. 13 Animal studies have also shown that caffeine can protect the brain's dopaminergic neurons.

Cooking meat. Heterocyclic amines (HCAs) are chemicals that are produced during high temperature meat cooking. These compounds have been investigated for their role in cancer, but not as much for their effect on neurodegenerative diseases. Working in animal models, NIEHS grantees showed that a variety of different HCAs were selectively toxic to the dopaminergic neurons affected in Parkinson’s disease. The findings are important because HCAs are a commonly consumed dietary component. 14

Vitamin D. Several studies suggest vitamin D deficiency may be involved in the development of Parkinson's. 15 Vitamin D, obtained through food or sunlight, plays an important role in regulating the normal function of brain cells, as well as in maintaining good balance and muscle strength. NIEHS-funded scientists at the UCLA School of Public Health found genetic variants that affect the body’s ability to respond to vitamin D may influence a person’s susceptibility to cognitive decline in Parkinson’s disease. Additional studies are needed to further clarify this association. 16 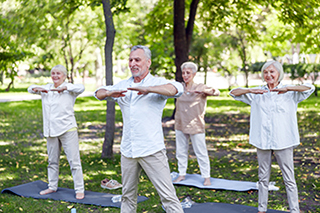 Exercise. Regular exercise can improve a person’s quality of life and can influence many chronic diseases, including cardiovascular disease and cancer. Several studies suggest that those benefits may extend to protecting against Parkinson's disease. In older U.S. adults, higher levels of moderate to vigorous physical activity during middle age were associated with lower risk of Parkinson's. 17 Exercise may also benefit patients with the disease, by improving balance and reducing depression. For example, some work has suggested that tai chi training in patients with mild to moderate Parkinson's improved balance and reduced falls. A recent study showed that a history of competitive sports and more lifelong physical exercise also predicted slower motor and cognitive decline in patients with Parkinson’s disease. 18

Heavy metals and the workplace. Welders exposed to the heavy metal manganese may develop symptoms associated with Parkinson’s disease, including slowness of movement in the arms and hands, speech problems, and reduced facial expressions. These symptoms may get worse the more workers are exposed, even when the concentrations of manganese are below the regulatory limit. 19 NIEHS grantees discovered how manganese exposure can lead to aggregation and spread of toxic clumps of alpha-synuclein proteins. 20 This study provides new information about the biological processes that link manganese exposure and the onset of Parkinson’s-like symptoms. 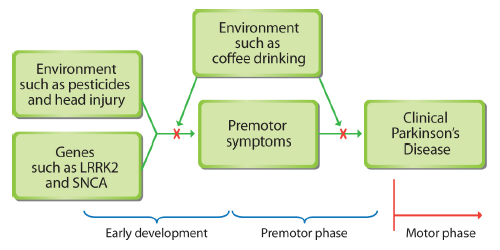 Some of the risk factors and premotor symptoms that may be involved in Parkinson's.

Premotor symptoms of Parkinson’s disease may occur years before some muscular problems surface. By thinking of Parkinson's as a systemic illness that takes decades to develop, researchers may better understand the causes of the disease and its progression. Some early warning indicators include premotor symptoms, including constipation, loss of smell, fatigue, and mood or anxiety disorders.

NIEHS-funded researchers developed a mathematical algorithm that could provide an early indicator to physicians that patients may need to be evaluated for the disease. 21 The predictive model relies on demographic data, as well as medical tests and diagnoses available in Medicare claims data, to identify people with a high probability of being diagnosed with Parkinson’s disease. This method may also be used to identify other factors, such as environmental hazards, that may be associated with a higher or lower risk of the disease.

Other work by NIEHS-funded scientists identified a chemical signature, or biomarker, in blood that predicts the rapid progression of the disease’s motor progression. 22 The scientists also identified biomarkers that suggest the immune system of Parkinson’s disease patients ages faster. The findings represent an important step forward in understanding how the illness evolves over time.

Over the past few decades, the development and use of animal models have provided valuable insight into the symptoms of Parkinson's and how the disease progresses. 23 Learning what causes the selective loss of dopamine neurons may inform development of new therapies that slow or reverse disease progression.

Other researchers are using nematodes and zebrafish to test the role that some chemicals may play in the brain, and to better understand how neurodegeneration occurs.

Beyond the above-mentioned research findings, NIEHS is funding more than 45 grant projects related to Parkinson's disease.

For example, in 2019 Kim Tieu, Ph.D., of the Stemple College of Public Health and Social Work in Miami, Florida, is investigating environmental factors that may trigger the death of brain cells in Parkinson’s disease. A goal is to develop therapies that prevent their loss. Specifically, Tieu plans to study how manganese and pesticides promote the accumulation and spread of toxic proteins in the brain.

At NIEHS, multidisciplinary teams of distinguished researchers work in our labs to understand the role of the environment, genes, and gene-environment interactions in Parkinson’s disease.