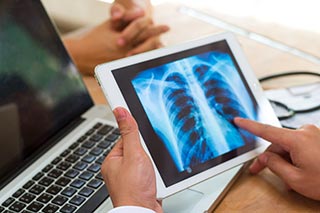 Lung disease refers to several types of diseases or disorders that prevent the lungs from functioning properly. Lung disease can affect respiratory function, or the ability to breathe, and pulmonary function, which is how well lungs work.

There are many different lung diseases, some of which are caused by bacterial, viral, or fungal infections. Other lung diseases are associated with environmental factors, including asthma, mesothelioma, and lung cancer.

Respiratory diseases such as asthma and COPD involve a narrowing or blockage of airways that reduce air flow.

In other lung conditions ̶ such as pulmonary fibrosis, a lung tissue scarring that can be caused by different factors, and pneumonia, a bacterial or viral infection in which air sacs fill with fluid ̶ the lungs have reduced ability to hold air.

Lung cancer is a disease caused by the abnormal growth of cells. Though most lung cancer starts in the lungs, some cases start in other parts of the body and spread to the lungs. The two main types of lung cancer—small cell and non-small cell—grow and spread in different ways, and each type may be treated differently.

Cigarette smoking is the overall leading cause of lung cancer. Breathing secondhand smoke can also increase a person’s chance of developing the disease.

Other environmental factors linked to lung disease include asbestos, radon gas, air pollution, and chemicals such as uranium, beryllium, vinyl chloride, and arsenic. 2

Lung Health and Your Environment

NIEHS conducts and funds studies to understand the genetic and environmental contributions to lung disease development, and to identify new ways to prevent and treat lung disease in people.

Air pollution studies – Long-term exposure to air pollutants can affect lung development and increase the chance of developing asthma, emphysema, and other respiratory diseases. Results from the NIEHS-supported Harvard Six Cities Study, the largest available database on the health effects of outdoor and indoor air pollution, show a strong association between exposure to ozone, fine particles, and sulfur dioxide with an increase in breathing problems, reduced lung capacity, and risk of early death.

Lung-on-a-chip – NIEHS supported development of a three-dimensional model of a breathing human lung on a microchip. 3 This model tests the effects of environmental exposures, as well as the safety of new drugs.

Genetics and lung function – By analyzing data from studies around the world, NIEHS researchers and their collaborators identified more than 50 genetic changes that affect the risk of pulmonary disorders in people of European, African, Asian, and Hispanic descent. 4 Several of these changes could affect how some drugs are developed to treat lung function problems.

Risk of respiratory disease – Mutations in a gene called macrophage receptor with collagenous structure, or MARCO, contributed to the severity of respiratory syncytial virus (RSV) disease in infants. 5 The findings may help identify people who have a greater chance of developing severe RSV infection and provide treatments to prevent disease.

Air pollution and COPD – Breathing air pollution can lead to COPD, as shown by a NIEHS-funded study that found diesel exhaust particles, a major source of air pollution, dampened the activity of genes involved stress response in the lung. 7

Mold exposure and lung disease – Mice that inhaled spores from the mold Aspergillus fumigatus, which is typical of moisture-damaged buildings, developed allergic and inflammatory reactions when the mold spores sprouted new growth. 9 , 10 The findings may influence the development of treatments for respiratory illnesses associated with mold exposure.

New biomarker for a respiratory condition – NIEHS researchers and their collaborators identified cholestenoic acid as a novel biomarker, a measurable substance in the body that indicates disease, for acute respiratory distress syndrome (ARDS), a life-threatening respiratory condition characterized by tissue damage and fluid buildup in the lungs. ARDS is deadly in 30-40% of cases, and only a few lung biomarkers have been validated. 11 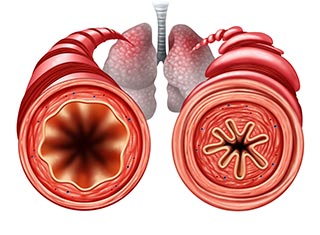 This diagram compares a healthy (left) to an unhealthy (right) bronchial tube that would cause constricted breathing from asthma.

Ambient air pollution and asthma – Two large NIEHS-funded studies show an association between decreases in levels of air pollutants and improvements in lung function along with reductions in asthma symptoms. 12 , 13 The findings underscore the importance of air pollution reduction policies and strategies on improved air quality and health.